The 2008 season of the K League kicked off on March 8. The season and playoff format will be the same as the one used in the 2007 season. The playoff fixtures are set to take place in late November, with the Final being played on two legs in early December.

The top six teams in the final table qualify for the playoffs. Fourth will play fifth and third will play sixth. The winners of those two games will then playoff against each other; the winner will then playoff against the team that finished in second place. Finally, the winner of this playoff will face the team that finished in first place over two legs to decide the overall league champions. 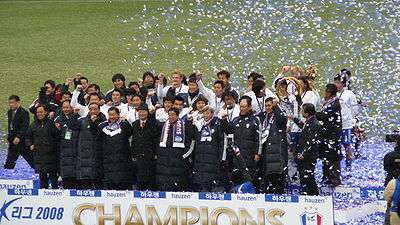 This article is issued from Wikipedia - version of the 10/25/2015. The text is available under the Creative Commons Attribution/Share Alike but additional terms may apply for the media files.