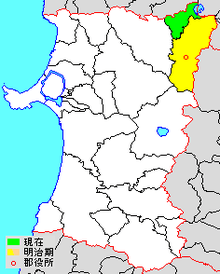 At present time (as of June 2013), the district consists of only the town of Kosaka with an estimated population of 5,749 and an area of 201.95 km². All of the city of Kazuno was formerly part of Kazuno District.

The area of Kazuno District was formerly part of Mutsu Province, and came under the new province of Rikuchū Province on January 19, 1869 following the Meiji restoration. At the time, the area consisted of 68 villages formerly under the control of Morioka Domain, which were under military occupation by Hirosaki Domain following the Boshin War. Akita Prefecture was founded on December 13, 1871, and the area was transferred to Akita.

With the establishment of the municipality system on April 1, 1889, modern Kazuno District, with two towns (Hanawa and Temanai) and 8 villages was established.