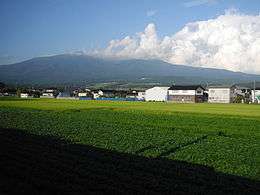 Nikaho (にかほ市, Nikaho-shi) is a city located in Akita Prefecture, in the northern Tohoku region of Japan.

Nikaho is located at the far southwest corner of Akita Prefecture, bordered by the Sea of Japan to the west, and by Yamagata Prefecture to the south. Part of the city is within the borders of the Chōkai Quasi-National Park.[1]

Nikaho has a Humid continental climate (Köppen climate classification Cfa) with large seasonal temperature differences, with warm to hot (and often humid) summers and cold (sometimes severely cold) winters. Precipitation significant throughout the year, but is heaviest from August to October.

The area of present-day Nikaho was part of ancient Ugo Province, dominated by the Satake clan during the Edo period, who ruled Kubota Domain under the Tokugawa shogunate. After the start of the Meiji period, it became part of Yuri District, Akita Prefecture in 1878.

The modern city of Nikaho was established on October 1, 2005, from the merger of the former towns of Nikaho, absorbing the towns of Kisakata and Konoura (all from Yuri District).

The economy of Nikaho is based on commercial fishing and agriculture. Industry includes a large factory by the electronics firm TDK.

Mount Chōkai is an inactive volcano which stands alone on the border between Akita Prefecture and Yamagata Prefecture. It is 2236 metres high and is the second highest mountain in the Tōhoku area. It is popular with skiers, hikers and climbers.

There are two main trails for climbing Mount Chōkai from the Akita side. One trailhead is in Yurihonjō, Akita, north of Nikaho. The other, in Nikaho, starts at the Nakajima parking area. A one-way hike from the Nakajima commonly takes 4 hours and offers outstanding views of the Japan Sea coast and the lush greenery of the Nikaho area.