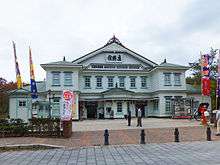 Kosaka is located in the Ou Mountains the mountains of far northeastern Akita Prefecture, with Aomori Prefecture on the north and Lake Towada to the northeast. Much of the town is within the borders of the Towada-Hachimantai National Park. Much of the town area is covered in forest. Due to its inland location, the town is noted for its heavy snowfall in winter.

Kosaka has a Humid continental climate (Köppen climate classification Dfa) with large seasonal temperature differences, with warm to hot (and often humid) summers and cold (sometimes severely cold) winters. Precipitation is significant throughout the year, but is heaviest from August to October.

The area of present-day Kosaka was part of ancient Mutsu Province and was ruled by the Nambu clan of Morioka Domain during the Edo period. The “Kosaka-kaido” highway connecting Morioka Domain with Hirosaki Domain passed through Kosaka. Under the Nambu, major deposits of gold and silver were mined by the Fujita-gumi, the predecessor to modern Dowa Holdings for the Nambu clan at the Kosaka mine. After the start of the Meiji period, the area became briefly part of Rikuchū Province before being transferred to Akita Prefecture in 1871. It was organized as part of Kazuno District, Akita Prefecture in 1878. The village of Kosaka was created with the establishment of the municipalities system on April 1, 1889. It was raised to town status on May 12, 1914.

With the depletion of the mineral deposits at the Kosaka Mine from the 1990s, the economy of Kosaka is now largely based on agriculture, forestry and seasonal tourism. Dowa Holdings, the owner of the Kosaka Mine is active in the metal recycling industry. In terms of light manufacturing, the Towada Audio Corporation, a manufacturer of shortwave radio sets, TV tuners and AC adapters in the Sony group, is based in Kosaka.

Kosaka has one elementary school, one middle school and one high school.

The Kosaka Smelting & Refining Kosaka Line provided passenger services until 1994. At present, the town is not served by any passenger railway line.