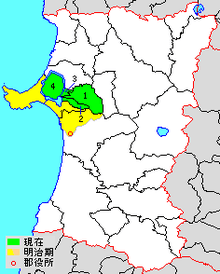 As of August 2013, the district has an estimated population of 24,553 and an area of 449.94 km². All of the cities of Oga and Katagami and part of the city of Akita were formerly part of Minamiakita District.

The area of Minamiakita District was formerly part of Dewa Province, and came under the new province of Ugo Province on January 19, 1869 following the Meiji restoration. At the time, the area consisted of 2 towns and 166 villages formerly under the control of Kubota Domain, based at Akita. The area became part of Akita Prefecture in 1871, and was organized as Minamiakita District in 1878. 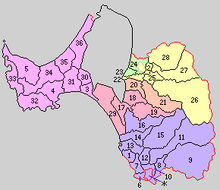 Tsuchiurako and Terauchi were annexed by Akita City on April 1, 1941 and the towns of Iidagawa and Okubo joined to form the town of Showa on March 24, 1942. However, on September 28, 1950 a portion of the town of Showa split away to re-create the town of Iidagawa. The town of Funakawa merged with four neighboring villages to create the city of Oga on March 31, 1954, which subsequently annexed the towns of Funakoshi and Kitaura on March 1, 1955. On September 30, 1956, Hitoichi was renamed Hachirōgata. Tenno was raised to town status on November 3, 1961, followed by Wakami on November 1, 1970 and Iikawa on August 1, 1974.