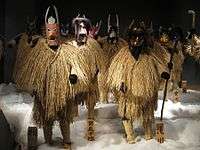 Oga (男鹿市, Oga-shi) is a city located in northern Akita Prefecture, in the northern Tohoku region of Japan.

Much of the city is within the boundaries of the Oga Quasi-National Park.

Oga is located on the Oga Peninsula in northwestern Akita Prefecture, bordered by the Sea of Japan to the north, west and south.

The area of present-day Oga was part of ancient Dewa Province, dominated by the Satake clan during the Edo period, who ruled Kubota Domain under the Tokugawa shogunate.

The modern city of Oga was created on March 31, 1954 by the merger of the town of Funagawaminato with four neighboring villages (all from MInamiakita District).

On March 22, 2005, the town of Wakami (from MInamiakita District) was merged into Oga.

The economy of Oga is based on commercial fishing and agriculture.

Oga is famous for its Namahage Festival, a traditional event held on New Year's Eve in which groups of men dressed as ogre-like deities called "Namahage" with masks and straw raincoats visit houses at night.[1]

This article is issued from Wikipedia - version of the 11/21/2015. The text is available under the Creative Commons Attribution/Share Alike but additional terms may apply for the media files.