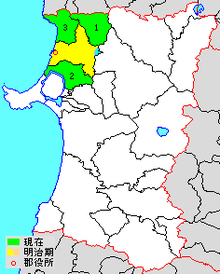 At present time (as of August 2013), the district has an estimated population of 29,254 and an area of 764.27 km². All of the city of Noshiro was formerly part of Yamamoto District.

The area of Yamamoto District was formerly part of Dewa Province, and came under the new province of Ugo Province on January 19, 1869 following the Meiji restoration. At the time, the area consisted of 2 towns and 72 villages formerly under the control of Kubota Domain, based at Akita. The area became part of Akita Prefecture in 1871, and was organized as Yamamoto District in 1878. 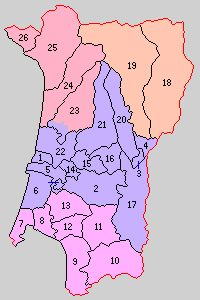 With the establishment of the municipality system on April 1, 1889, two towns (Noshiroko and Hiyama) and 24 villages were established. Futatsui was raised to town status on June 4, 1902, followed by Kado on January 1, 1932. Noshiroko became the city of Noshiro on October 1, 1940.

In 2006, as part of the Heisei period Municipal mergers and dissolutions in Japan, all of the district except for the town of Fujisato was scheduled to merge with Noshiro to form the new city of Shirakami. However, the residents of Noshiro were opposed to this name and left the merger conference. The remaining six towns and villages tried to merge, but this plan failed as the merger would turn Hachimori and Minehama into an exclave of the new city. Noshiro delegates attempted to return to the conference, but the other conference members rejected their participation and the meeting split into the three different merger conferences of "Noshiro-Futatsui," "Southern Three Towns," and "Northern Two Towns and Villages." As a result: