For the non-profit corporation based in Seattle, see PONCHO. 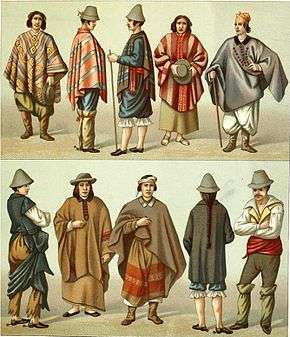 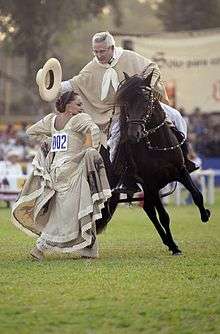 A Peruvian chalán dancing marinera on a peruvian paso horse.

A poncho (Spanish pronunciation: [ˈpontʃo]; punchu in Quechua; Mapudungun pontro, blanket, woolen fabric)[1][2][3] is an outer garment designed to keep the body warm. A rain poncho is made from a watertight material designed to keep the body dry from the rain. Ponchos have been used by the Native American peoples of the Andes since pre-Hispanic times, from places now under the territory of Peru, and are now considered typical South American garments.

In its simplest form the poncho is essentially a single large sheet of fabric with an opening in the center for the head and often it has an extra piece of fabric serving as a hood. Rainproof ponchos normally are fitted with fasteners to close the sides once the poncho is draped over the body, with openings provided for the arms; many have hoods attached to ward off wind and rain.

Alternative ponchos are now designed as fashion items.[4] They are the same shape but of different material. They are designed to look fashionable and provide warmth while remaining breathable and comfortable, rather than to ward off wind and rain. These are often made out of wool or yarn, knitted or crocheted. Ponchos with festive designs or colors can be worn at special events as well. 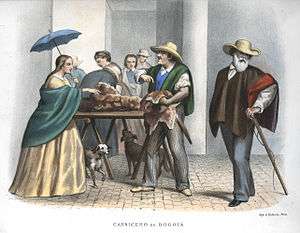 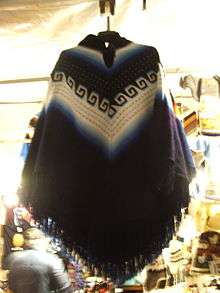 Poncho of Andean inspired design in a flea market in Genoa, Italy 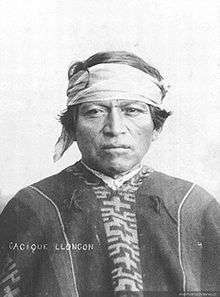 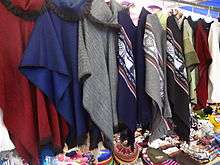 Alpaca Ponchos at the Otavalo Artisan Market in the Andes Mountains of Ecuador.

The poncho was one of the typical clothes of the Paracas, a Peruvian, Pre-Inca Culture around 500 B.C.[5] Nowadays the poncho is commonly associated with the Americas. As traditional clothing, the local names and variants are:

The poncho was first used on a regular basis in the 1850s for irregular U.S. military forces operating on the U.S. Western Plains.[6] These early military ponchos were made of gutta percha muslin, a latex-coated, waterproof cloth.[7] Ponchos made of gutta-percha or India rubber coated cloth were officially adopted during the American Civil War, both as rain clothing and as a ground sheet for sleeping. While originally intended for cavalry forces, they were widely used by infantry as well; General Sherman's Union troops, lightly equipped and living off procurement demand from the local populace, wore ponchos during wet weather encountered during the march through Confederate Georgia to the sea.[7]

Discontinued after the Civil War, the U.S. Army again issued ponchos of waterproof rubberized canvas to its forces during the Spanish–American War of 1898.[8] Two years later, both the Army and the Marines were forced to issue waterproof rubberized cloth ponchos with high neck collars during the Philippine–American War in 1900.[7] With the entry of the United States into World War I, both doughboys and Marines in France wore the poncho; it was preferred over the raincoat for its ability to keep both the wearer and his pack dry, as well as serving as a roof for a makeshift shelter.[9]

Just prior to World War II, ponchos were significantly improved during testing with the U.S. Army Jungle Experimental Platoon in the jungles of Panama, incorporating new, lighter materials and a drawcord hood that could be closed off to form a rain fly or ground sheet.[7] Ponchos were widely used by United States armed forces during World War II; even lightly equipped foot-mounted forces such as Merrill's Marauders, forced to discard tentage and all other unnecessary equipment, retained their blanket and poncho.[10] During the 1950s, new lightweight coated nylon and other synthetic materials were developed for military ponchos. The poncho has remained in service ever since as a standard piece of U.S. military field equipment.[7] Today, the United States armed forces issue ponchos that may be used as a field expedient shelter. These garments are also used by hunters, campers, and rescue workers.

During World War II, the German Army (Wehrmacht) issued the Zeltbahn (see Shelter half), a poncho that could be combined to form tents. A typical four-man tent used four Zeltbahnen.

The dictionary definition of poncho at Wiktionary