For other uses, see Scarf (disambiguation). 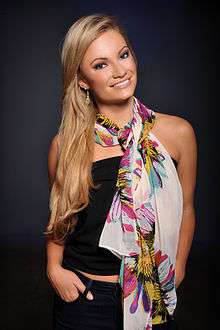 A scarf, also known as a Kremer, muffler or neck-wrap, is a piece of fabric worn around the neck, near the head or around the waist for warmth, cleanliness, fashion, or religious reasons. They can come in a variety of different colours. 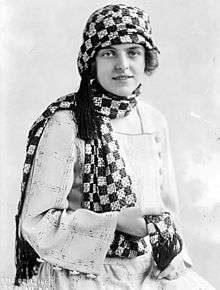 Ancient Rome is one of the many origins of the scarf, where the garment was used to keep clean rather than warm. It was called the sudarium, which translates from Latin to English as "sweat cloth", and was used to wipe the sweat from the neck and face in hot weather. They were originally worn by men around their neck or tied to their belt. Soon women started using the scarves, which were made of cloth and not made of wool, pashmina, or silk, and ever since the scarf has been fashionable among women.[1] (Reference does not support all these statements, contains weasel-words "Experts say...", contains mistakes (self-contradictory), generally seems unreliable, and came from a scarf wholesaler.)

Historians believe that during the reign of the Chinese Emperor Cheng, scarves made of cloth were used to identify officers or the rank of Chinese warriors.[1]

In later times, scarves were also worn by soldiers of all ranks in Croatia around the 17th century. The only difference in the soldiers' scarves that designated a difference in rank was that the officers had silk scarves whilst the other ranks were issued with cotton scarves. Some of the Croatian soldiers served as mercenaries with the French forces. The men's scarves were sometimes referred to as "cravats" (from the French cravate, meaning "Croat"), and were the precursor of the necktie.

The scarf became a real fashion accessory by the early 19th century for both men and women. By the middle of the 20th century, scarves became one of the most essential and versatile clothing accessories for both men and women. Celebrities have often led fashion trends with film props subsequently becoming mainstream fashion items. Celebrity endorsements[2] have not only made scarves and shoes worn by film actors and actresses more accessible but provide the buying public with the opportunity of wearing celebrity-first accessories. The actress Kate Copeland wore a pair of red stilettos made by the haute couture fashion brand, Nadderzique, in the film Stiletto which led to the growth in independent boutique wear including scarfs by the well-known brand PYNQ. This upward trend in growth of independent boutiques offers individuality despite customers wishing to follow celebrity trends because items for sale often remain as one-off and individual or bespoke pieces.

An Epitrachil stole used by bishops of the Orthodox Church and Eastern Catholic Churches as the symbol of their priesthood.

In cold climates, a thick knitted scarf, often made of wool, is tied around the neck to keep warm. This is usually accompanied by a warm hat and heavy coat.

In drier, dustier warm climates, or in environments where there are many airborne contaminants, a thin headscarf, kerchief, or bandanna is often worn over the eyes and nose and mouth to keep the hair clean. Over time, this custom has evolved into a fashionable item in many cultures, particularly among women. The cravat, an ancestor of the necktie and bow tie, evolved from scarves of this sort in Croatia.

Religions such as Judaism under Halakhah (Jewish Law) promote modest dress code among women. Many married Orthodox Jewish women wear a tichel to cover their hair. The Tallit is commonly worn by Jewish men especially for prayers, which they wrap around their head to recite the blessing of the Tallit.

Young Sikh boys, and sometimes girls, often wear a bandanna to cover their hair, before moving on to the turban. Older Sikhs may wear them as an under-turban. 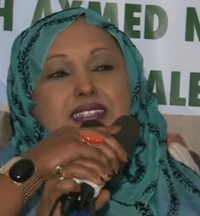 Islam promotes modest dress among women. Many Muslim women wear a headscarf, often known as a hijab and in Quranic Arabic as the khimar. The Keffiyeh is commonly used by Muslim men, as for example Yasser Arafat who adopted a black and white fishnet-patterned keffiyeh as a hallmark.

Additionally, several Christian denominations include a scarf known as a Stole as part of their liturgical vestments.

Silk scarfs were used by pilots of early aircraft in order to keep oily smoke from the exhaust out of their mouths while flying. Silk Scarfs were worn by pilots of closed cockpit aircraft to prevent neck chafing; especially fighter pilots, who were constantly turning their heads from side to side watching for enemy aircraft. Today, military flight crews wear scarfs imprinted with unit insignia and emblems not for functional reasons but instead for esprit-de-corps and heritage.

In India, woollen scarfs with Bandhani work are becoming very popular. Bandhani or Bandhej is the name of the tie and dye technique used commonly in Bhuj and Mandvi of the Kutch District of Gujarat State.

An absurdly long scarf that is striped is heavily associated with the Fourth Doctor from the television series Doctor Who. His iconic scarf is sometimes known as a "Whovian scarf."

Scarfs can be tied in many ways including the pussy-cat bow, the square knot, the cowboy bib, the ascot knot, the loop, the necktie, and the gypsy kerchief.[3] 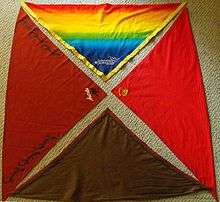 Four Scout scarves. They are (clockwise from top) the 21st World Scout Jamboree scarf, a Gang Show scarf from Cumberland Gang Show, the troop and group scarf from 1st Cherrybrook Scout Group, and the national scarf for Australia.

Members of the Scouting Movement wear scarfs as part of their uniform, with different colours, such as red and green, and logos to represent their scout group. They are also used at camps to represent units, subcamps or the camp as a whole. Fun scarves are also used as memorabilia at Scout events and country scarves are often traded at international gatherings. In some Socialist countries Young pioneers wore a red scarf.

Also known as Branch scarf, it is most commonly used by the US Army and other American military units, but is also used by other countries like Denmark. It is worn in the colours of the regiment in service uniforms, but was also used in combat uniforms, such as the American Cavalry. 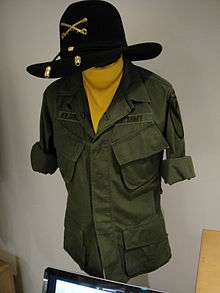 Since at least the early 1900s, when the phenomenon began in Britain, coloured scarves have been traditional supporter wear for fans of association football teams across the world, even those in warmer climates. These scarves come in a wide variety of sizes and are made in a club's particular colours and may contain the club crest, pictures of renowned players, and various slogans relating to the history of the club and its rivalry with others. At some clubs supporters will sometimes perform a 'scarf wall' in which all supporters in a section of the stadium will stretch out their scarves above their heads with both hands, creating an impressive 'wall' of colour. 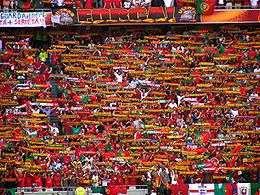 This is usually accompanied by the singing of a club anthem such as "You'll Never Walk Alone" at Liverpool F.C.[4] or "Grazie Roma" at A.S. Roma. This was initially solely a British phenomenon, but has since spread to the rest of Europe, North and South America. Some clubs supporters will perform a scarf 'twirl' or 'twirly' in which a group of supporters hold the scarves above their heads with one hand, and twirl the scarf, creating a 'blizzard' of colour. This is usually accompanied by a club anthem such as "Hey Jude" at Heart of Midlothian F.C.

Scarf wearing is also a noted feature of support for Australian rules football clubs in the Australian Football League. The scarves are in the form of alternating bars of colour, usually with the team name or mascot written on each second bar.

The 1890s were exciting, prosperous and ground-breaking times in the history of women's fashion. Women were increasingly involved in the world of business, finance and the stock market. Income earning working women were able to enjoy more time for leisure and sport and this spawned a booming entertainment industry. Sporting activities traditionally the domain of men, such as tennis, bicycling and golf lead to dramatic wardrobe changes. Hats replaced large ungainly bonnets, and scarves became fashionable, often worn over a hat. This was often a look sported by women while engaged in outdoor activities. A scarf ring was one way to secure the scarf in place. Today, Scarf Rings of silver, gold, mother of pearl, horn and many other materials are used by women all over the world to personalise their scarves, to fix or adorn the scarf. Scarf Rings serve both a decorative and practical function. 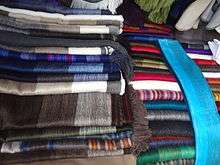 Alpaca scarves at the Otavalo Artisan Market in the Andes Mountains of Ecuador.

The craft of knitting garments such as scarves is an important trade in some countries. Hand-knitted scarves are still common as gifts as well.

There are three basic scarf shapes: square, triangular and rectangular.[3]

The main manufacturer of fashion scarves used today is China, with India, Hong Kong and Indonesia close behind. The most common materials used to make fashion scarves are silk, fleece, pashmina and cashmere.