Wa (Va) is the language of the Wa people of Burma and China. There are three distinct varieties, sometimes considered separate languages; their names in Ethnologue are Parauk, the majority and standard form; Vo (Zhenkang Wa, 40,000 speakers), and Awa (100,000 speakers), though all may be called Wa, Awa, Va, Vo. David Bradley (1994) estimates there are total of 820,000 Wa speakers.

Gerard Diffloth refers to the Wa geographic region as the "Wa corridor", which lies between the Salween and Mekong Rivers. According to Diffloth, variants include South Wa, "Bible Wa", and Kawa (Chinese Wa).

Christian Wa are more likely to support the use of Standard Wa, since their Bible is based on a standard version of Wa, which is in turn based on the variant spoken in Bang Wai, 150 miles north of Kengtung (Watkins 2002). Bang Wai is located in northern Shan State, Burma, close to the Chinese border where Cangyuan County is located.

Certain dialects of Wa preserve a final -/s/. They include the variants spoken in Meung Yang and Ximeng County (such as a variety spoken in Zhongke 中课, Masan 马散, Ximeng County that was documented by Zhou & Yan (1984)) (Watkins 2002:8).

A small number of Wa speakers also reside in Taunggyi, Mandalay, and Yangon.

The PRC writing system for Wa is based on the Wa variant in Aishuai, Cangyuan County, Yunnan.

A small number of Wa speakers also reside in Kunming and throughout various parts of Yunnan.

The three dialects of Wa (and their respective subdialects) according to Zhou, et al. (2004) are:[3]

Wa have also migrated to Thailand in the past several decades, mainly from Burma. There are about 10,000 Wa speakers in Thailand. Wa villages can be found in (Watkins 2002:6):

Standard Wa is a non-tonal language. However, there are dialects that are tonal. There is correspondence between tones in tonal dialects and tenseness in non-tonal dialects.[6]

In Wa, there are 44 phonemes;[7] 35 consonants[8] and 9 vowels. All of these vowels can be tense or lax. Tenseness is a phonemic feature in syllables with unaspirated initials.[6] 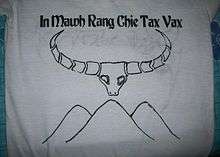 Wa writing and cultural symbols on a T-shirt

The Wa language formerly had no script and some of the few Wa that were literate used Chinese characters, while others used the Shan language and its script. Christian missionary work among the Wa began at the beginning of the 20th century first in the Burmese and later in the Chinese areas of the Wa territory. It was led by William Marcus Young, from Nebraska. The first transcription of the Wa language was devised by Young and Sara Yaw Shu Chin (Joshua) in 1931 with the purpose of translating the Bible. This first Wa alphabet was based on the Latin script and the very first publication was a compilation of Wa hymns in 1933,[9] the Wa New Testament being completed in 1938. This transcription, known as "Bible orthography" is known as lǎowǎwén 老佤文 "old Wa orthography" in Chinese, and is now used mainly in the Burmese Wa areas and among the Wa in Thailand through the materials published by the Wa Welfare Society (Cub Yuh Bwan Ka son Vax, Cub Pa Yuh Phuk Lai Vax, Phuk Lai Hak Tiex Vax) in Chiang Mai.[10]

A revised Bible orthography has been adopted as "official Wa spelling" by the central authorities of the Wa Special Region 2 in Pangkham which have published a series of primers in order to improve the literacy of the United Wa State Army troops. Also, after 2000 Wa people in social networks such as Facebook, as well as Wa songwriters in karaoke lyrics of Wa songs, use this Myanmar (revised Bible) orthography in its main variations.[11]

In China, a transcription adapted to the new pinyin romanization, known as "PRC orthography" or "Chinese orthography", was developed for the Wa people in 1956. However, its publications, mainly propagated through the Yunnan administration, are yet to reach a wider public beyond academics. This transcription, which originally included even a couple of letters of the Cyrillic script, has also since been revised. Despite the revisions, both the Chinese and the Bible orthography are still marred by inconsistencies.[12]