Anholt (Danish pronunciation: [ˈanhɔˀld]) is a Danish island in the Kattegat, midway between Jutland and Sweden at the entrance to the Baltic Sea in Northern Europe. There are 145 permanent residents as of 1 January 2016.[1] Anholt is seven miles (11 km) long and about four miles (6 km) wide at its widest, and covers an area of 21,75 km². Anholt is part of Norddjurs Municipality in Region Midtjylland. Before the 2007 municipal reform, it was in Grenå Municipality. 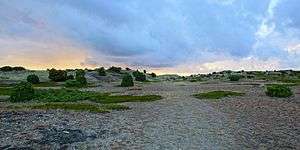 The western fifth of Anholt consists of hilly moraine country, while the eastern four-fifths of the island consist of mostly flat raised seabed with some low hills, former wind-blown sand dunes. Only the western moraine hills are inhabited. The eastern part, called "Ørkenen" - the Desert - is treeless; the government has protected the area and permits no building there. The desert has never been ploughed. For this reason the original stone age topography from when the glaciation ceased, at the end of the last ice age 10,000 years ago, is still visible in many places. This includes former shorelines inland, consequences of different sea levels over time. The unploughed features of The Desert are unique for Denmark, as well as for this part of Europe.

The inhabited part of Anholt has two villages, The Harbour and Anholt Town, inland. There are also 300–400 summer houses, some of them rentals. 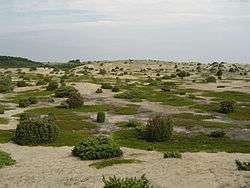 The western part of Anholt is a moraine landscape. The small village is situated in the middle of the landscape, whereas the harbour (built 1902) is at the northwestern tip of the island. The eastern part of the island is known as Ørkenen ("desert"). This desert-like area is the largest of its kind in Northern Europe. The desertification was caused by deforestation. Strictly speaking, the "desert" is not a true desert, but a lichen heath, with some 300 to 400 types of lichen.

Great efforts are being taken to preserve the unique scenery and prevent the devastating effects of erosion. In 1995/6 the Danish Heath Society cleared large areas in the south part of Ørkenen of mountain pine.

On Totten, the eastern tip of the island, there is one of the biggest colonies of seals in Denmark. This part of the island is closed to visitors. 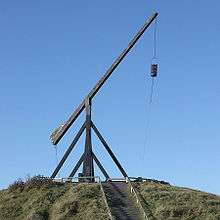 Dangerous reefs and shoals surround Anholt. Consequently, in 1560 King Frederick II ordered the erection of bascule lights at Skagen, Anholt, and Kullen Lighthouse to mark the main route through Danish waters from the North Sea to the Baltic.[2] Despite the bascule light, on 10 November 1716 the 60-gun third-rate HMS Auguste, Captain Robert Johnson, ran ashore on the island of Anholt during heavy weather and was wrecked.[3] Most of the people on her were saved. An ecological consequence of the introduction of the bascule light was the deforestation of Anholt for firewood, resulting in Anholt's "desert". By the time of the switch after 1600 to imported pit coal, considerable damage had been done.[4]

Then in early 1842 an intermittent (flashing) light replaced the fixed light, and a lightship was towed to a station of the Knobben, off Anholt. Around the mid-19th century there was also a floating light stationed several miles out from the lighthouse, near the end of the several miles long reef. This floating light operated from May to December.

Today's tower dates to 1881, at which time an oil lamp replaced the fire. At one time there was also a beacon fire in the middle of the east coast of the island, but that has disappeared. The present Anholt Fyr (lighthouse) belongs to the Danish Maritime Safety Administration and has the status of a protected historical landmark.

Anholt has been settled since the New Stone Age and one may still find flint flakes on the “desert”. There have been some Old Stone Age finds as well. The island has never been the object of systematic archaeological investigation, so no Bronze Age remnants have been found. Some Viking finds have been made.

The 1231 land register of King Valdemar II shows that the king owned a house or a hunting lodge on the Sønderbjerg, the island's highest point. Anholt was thus property of the crown. In 1441 the island was under the administration of Kalø Lehn, headed by Otto Nielsen Rosenkrands.

Anholt belonged to the parish of Morup in the Danish province of Halland until the middle of the 16th century, when a church was built on the island itself.[5] The island remained Danish when Denmark ceded Halland to Sweden in 1645. A story claims that a negotiator had left a glass of beer placed over the island on the map during the peace negotiations. A more plausible explanation is that Swedish forces had not conquered the fairly remote island and had little interest in it.

Early in the Gunboat War (part of the Napoleonic Wars), the Danes closed the lighthouse on Anholt. On 5 December 1808 the bomb vessel HMS Proselyte was wrecked on Anholt Reef while caught in the ice; all her crew was saved. She had stationed herself off the island on 9 November 1808 to carry a light for the safety of passing convoys.

Following the loss of Proselyte, on 18 May 1809 the 64-gun third rate HMS Standard, under Captain Askew Paffard Hollis, and the 18-pounder 36-gun frigate Owen Glendower captured the island. A party of seamen and marines under the command of Captain William Selby of Owen Glendower, with the assistance of Captain Edward Nicolls of the Standard's marines, landed. The Danish garrison of 170 men put up a sharp but ineffectual resistance that killed one British marine and wounded two; the garrison then surrendered. The British took immediate possession of the island. The principal objective of the mission was to restore the lighthouse on the island to its pre-war state to facilitate the movement of British men of war and merchantmen navigating the dangerous seas there.[6]

The Danes attempted to retake the island. However, the Battle of Anholt (27 March 1811) resulted in many Danish casualties and proved a decisive British victory. There is a monument commemorating the battle in Anholt village.

While captain of HMS Elephant, Francis Austen visited Anholt in 1812 and wrote about it to his sister, the famed novelist Jane Austen. He described the lighthouse in some detail and also gave some impressions of the island:

The garrison at present consists of about three men of a veteran battalion, and a few marine artillery, which form by many degrees the most considerable portion of the population, for, exclusive of the military and their appendages of wives and children, there are but sixteen families on the island, who all reside at the only village on it, near the high ground to the westward, and whose principal occupation is fishing, in which they are generally very successful during the summer.

Antecedent to the war between England and Denmark and the consequent occupation of the island by the English, the Anholters paid a small rent to the proprietor of the soil, who is a Danish nobleman residing at Copenhagen; but at present they are considered and fed as prisoners of war by the English. They are an exceedingly poor people, and seem to enjoy but a small proportion of worldly comfort.[7]

On 28 February 1812, the 16-gun brig HMS Fly was wrecked on Anholt, but without loss of life. Then on 19 August 1812, Dano-Norwegian gunboats captured HMS Attack off the island after an engagement. The British held Anholt until the Treaty of Kiel ended the war on 15 January 1814.

In the 1940s a British visitor heard children reciting a verse which they did not understand the meaning of "Jeck og Jill vent op de hill, og Jill kom tombling after". The ditty, it turned out, had been a nursery rhyme brought to the island by British soldiers during the Napoleonic wars.[8]

Denmark was neutral during the war and neither side disturbed the Kattegat until late in the war when the British laid a minefield. During the operation the British sank 10 trawlers off Anholt.

There were several World War II sinkings off Anholt.

There is a small graveyard on Anholt that holds the remains of five allied airmen. Three are from an Avro Lancaster of 438 Squadron that crashed into the Baltic around 29–30 August 1944. On 15 December a JU-88 night fighter shot down an Avro Lancaster of 106 Squadron, which had a crew of eight. Only three bodies washed ashore, one of them on Anholt; the others were never recovered. 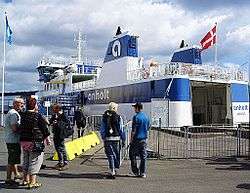 The Anholt Ferry in Grenaa Harbor.

A daily ferry from, Grenå, on the eastern coast of Jutland, takes about three hours to reach Anholt. The ferry detours around the wind farm, which will compensate for the increased fuel consumption in order to maintain sailing schedules.[9]

Anholt has an airport (ICAO: EKAT) with a 650-metre-long (2,130 ft) grass runway. There are daily flights to Anholt during the summer and weekly flights in the winter.

Flights depart from Roskilde Airport on the Danish main island, Sealand, via Copenhagen Air Taxi. The flights also go on to Læsø Island, and return to Roskilde from there, via Anholt.

One can also fly from Varberg, Sweden, via charter from Varbergs Flygklubb, a flying club. 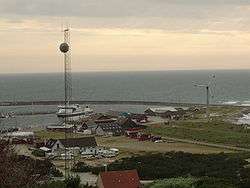 After some years of political debate, in 1899 construction commenced on a fishing harbour for the island. The construction was finished and the port entered service in 1902. The harbour functioned as a safe haven in storms for the vessels fishing in the Kattegat, as well as a home port for Anholt's own fishermen. Today there is a marina at the harbour and the ferry docks here too. In 2003 Anholt celebrated the 100th anniversary of the opening, but one year late.

The first rescue facility on the island was established in 1878 at the lighthouse. It was abandoned in 1926. The second rescue facility was built in 1919, but abandoned in 1938. Today there is a rescue vessel stationed at a mole in the harbour. Over the last 200 years over 200 vessels have foundered near Anholt.

Some 60,000 people visit Anholt each year. From the end of June to the first half of August the harbor is a tourist resort with restaurants, tourist shops, and an always full marina next to a sandy beach. Danish, Norwegian, Swedish and German yachts are among the most common sailing boats seen at Anholt.

Anholt has no luxury hotels or resorts. There are some Bed and Breakfast facilities and a campground. The Tourist Office, located at the harbor office, can help with information about accommodation.

Anholt's main attraction is nature in the form of clean water, with an abundance of often empty sandy beaches, plus calm, beauty, and fresh air. From the two highest points on the island – Sønderbjerg (48 m) and Nordbjerg (39 m) – one can see Jutland or Sweden on a clear day.

Outside the summer season, there are few visitors to Anholt. Currently an effort is made to extend the tourist season via events such as an Anholt Marathon and festivals. 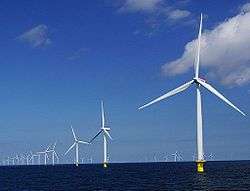 DONG Energy has built the Anholt Offshore Wind Farm in the Kattegat, between Anholt island and Djursland (on the mainland). It consists of 110 wind turbines and has a nameplate capacity of 400 megawatts (MW).

Fishermen have been compensated for the loss of fisheries during construction. With the wind farm complete, net fishing is allowed, but trawling is banned inside the park-area.[9]

The school, north of the meeting house, was built in 1917 and enlarged in 1956. It teaches students from kindergarten to year 9.

The present church was built in 1819, after the previous one was destroyed during British occupation of the island in the early 1810s. There is evidence in the foundations of an even older church. Anholt has a tradition for building houses that include materials from flotsam.