For the wine grapes that are also known as Samso, see Samsó.

Samsø (Anglicized: "Samso" or "Samsoe") is a Danish island in the Kattegat 15 kilometers (9.3 mi) off the Jutland Peninsula. Samsø is located in Samsø municipality. The community has 3,806 inhabitants[1] (2013) called Samsings and is 114 km² in area. Due to its central location, the island was used during the Viking Age as a meeting place. The etymology of the island's name is unknown.[2]

In 1997, Samsø won a government competition to become a model renewable energy community. Now 100% of its electricity comes from wind power and biomass.[1][3]

The island is popular among French, Welsh and Irish people for strawberry picking during the months of June and July every year. In Denmark, the island is well known for its early harvest of new potatoes. The first few pounds of these potatoes usually fetch prices around £100, and are considered a great delicacy. Ballen's beach and village are popular with visitors. The island is served by a bus service which runs around the island, including the two ferry terminals in Sælvig and Ballen. In clear weather, the peninsula of Helgenæs to the north is visible. Geographically, the island divides into three areas:

The North Island is divided from the South Island by the artificial Kanhave canal. Here a larger part of the countryside is uncultivated and it presents a wavy landscape of meadows and small patches of woodland and heath. Like the rest of Samsø, the coastline is characterized by steep cliffs and stony beaches, with some sandy beaches in between suited for bathing. Issehoved is Samsø's northernmost point and presents what have been described as a miniature of Skagens "Grenen". The small towns of Nordby, Mårup and Langør is situated on the North Island. Just north of Nordby is the worlds biggest permanent labyrinth named 'Labyrinten', founded in the year 2000. It comprise a 60,000-square-metre (645,835-square-foot) patch of conifer woodland, grown on a previous christmas tree plantation.[4] Northwest of Nordby, is the hill of Ballebjerg, Samsøs highest point, reaching 64 m. Near the village of Mårup is the harbour of Mårup Havn. In the summer months (17 June to 22 August) the old wooden freight-ship M/S Tunø, ferry passengers back and forth from here to the island of Tunø just west of Samsø, two days a week. Other two days of the week, the same boat is offering seal-safaris from Langør at Stavns Fjord.[5]

The shallow lagoon of Stavns Fjord, houses most of the smaller islands of Samsø municipality. The largest of them is Hjortholm and most of the rest are just small islets really, but have been named individually. The lagoon is separated from the sea of Kattegat by the 7 km long sandbar of Besser Rev. It is possible to walk on the reef all the way to the tip at low tide (ebb), except when the birds are breeding here. It is important to be aware of the tides, as there can be strong and dangerous currents at the reefs junction to Samsø during high tide (flow). East of Stavns Fjord, in Kattegat, lies a group of small islands (Kyholm, Lindholm, Rumpen, Vejrø) with a couple of sandbars. The entire area is to be protected.

The South Island is home to the seat of the mayor and Samsø's largest town Tranebjerg, but there are many other hamlets and villages (18 in all) spread across the countryside. The village of Ballen, lies on the east coast and is also home to the Energy Academy. Most of the land on the South Island is cultivated, but there are spots of nature like the forest Brattingsborg Skov and the cliffs, shrubs and beach meadows on the southcoast. Just south of the Kanhave canal is Samsø Airport.

Ecological agriculture and production is significant on Samsø, with a broad network of cooperating associations. It comprise farming of a large variety of vegetables, grains and fruits, livestock meat and products (lambs, sheep, yarn, cows, pigs, horses, donkeys, goats, chickens, eggs), a dairy, a brewery, restaurants and cafés, candy production, permaculture and forest garden experiments. There are several plans for extending the overall ecological production and broaden the industry (a slaughterhouse, orangery, forest gardens and education), with a wish for creating more jobs and stimulate settlements on the island.[6]

In 1997, Samsø won a government competition to become a model renewable energy community. At the time Samsø was entirely dependent on oil and coal, both of which it imported from the mainland.[1]

An offshore wind farm comprising 10 turbines (making a total of 21 altogether including land-based windmills), was completed, funded by the islanders.[7] The people of Samsø heat their homes with straw burned in a central heating system and they power some vehicles on biofuel which they also grow. Now 100% of its electricity comes from wind power and 75% of its heat comes from solar power and biomass energy.[8] An Energy Academy has opened in Ballen, with a visitor education center. The academy is currently working towards making Samsø 100% fossil fuel free.[9]

The name Samsø is of unknown origin. The name is known from 1075 as Samse. The word is a simplex and the -ø ending is thus a later transformation, indicating that the name Samsø is not related to the Danish word and letter 'ø' (English: island).[10] 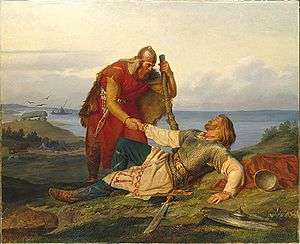 The Norwegian warrior Örvar-Oddr bids a last farewell to his blood brother, the Swedish warrior Hjalmar after the Battle of Samsø, by Mårten Eskil Winge (1866).

People have lived and hunted on Samsø from the earliest of times, when the ice receded at the end of the last Ice Age. Samsø first became an island for approximately 9,000 years ago and there are several traces like dolmens, burial mounds, passage graves, kitchen middens, etc. from the Stone Age and Bronze Age cultures across the landscape. Excavations at Tønnesminde, for example, show evidence of human habitation from the Stone Age through the Viking Age.

On this island, Saxo Grammaticus relates that there was a legendary battle, when the Swedish champion Hjalmar and his friend Orvar-Odd fought against the twelve sons of the Swedish berserker Arngrim. This battle was once famous, since it also figures in Faroese ballads, in Orvar-Odd's saga and in Hervarar saga.

According to the Hervarar saga and the Waking of Angantyr, the mounds of the slain berserkers were haunted. This did not stop Arngrim's granddaughter Hervor from approaching the mounds and demanding the enchanted sword Tyrfing from her father Angantyr.

"Samsey" (-ey being an earlier Norse form of -ø) is the island upon which Odin, under the name Jalk, learned Seid magic.

At its narrowest place, a canal has been dug across the island. The canal is about 500 m long and 11 m wide and could in its time be navigated by vessels with a draught of up to 1 m. It was dug and clad with wooden linings in the years 726-729 AD; the last part of the Scandinavian Iron Age. Kanhave canal is one of the largest known engineering projects of the Vikings and it is a sign of the centralized power of the time. Kanhave canal is thought of as instrumental to dominating the sea of Kattegat. [11]

All the known sources suggests, that the island was the property of the crown throughout medieval times, but it was an age of conflict and insecurity nevertheless, as a total of five fortresses were built on Samsø in the Middle Ages; Vesborg where the lighthouse is nowadays, Gammel Brattingsborg where the town of Tranebjerg is now, Hjortholm on the islet of the same name in the Stavns Fjord lagoon, Bisgård at the bishop's palace (official residence) in the parish of Onsbjerg and the small fortification of Blafferholm in the garden of Brattingsborg manor. None of them are left standing today. Only the castle hills and the archaeological excavations of the foundations remains. The National Museum of Denmark initiated thorough archaeological investigations of the fortification sites a few years ago and the field work terminated in 2012. [12][13][14]

From 1831-1857 there was a plague- and cholera-quarantine on the tiny island of Kyholm just east of Samsø. Here, ships returning from long voyages had to dock, if they had disease on board. There is an abandoned cemetery of around 100 graves on the island. Kyholm is accessible year round, but it is advised not to be around, when the birds are breeding.