Mors or Morsø is a small island in the shallow sound called Limfjorden in Denmark. It has an area of 367.3 km2 and as of 1 January 2010, it had a population of 21,800.[1] The main town on the island is called Nykøbing Mors. Geologically Mors is unique. Like the neighbouring island of Fur, it is known for its deposits of diatomite, locally known as 'moler' (mo-clay).

The development in the number of inhabitants on the island is as follows: 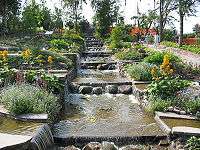 The largest flower park in the Nordic countries, Jesperhus is situated in Legind Bjerg, to the south west of Nykøbing. In the park there are over one million species of plants including cacti, palms, a variety of roses and many more colourful flowers. The park also has a butterfly reserve, aquarium, aviarium, terrarium and hatching center.

The Moler Museum boasts the largest collection of moler fossils in Denmark and tells the story of moler geology, the natural history of the island, and the relationship between the Danish people and moler including its manufacturing properties. The fossils include imprints of birds, fish, turtles, plants and insects.

Hanklit is situated on the northern coast of the island and is a beautiful cliff face and tourist attraction. The cliff is c. 60 metres high and has several moler deposits. Several people search the cliff face for plant and animal fossils and there are also paragliders who use the nearby hills of Salerhoj for takeoff.

During the Jutland Peasant rebellion of 1441, Christopher of Bavaria, King of Denmark, approached the rebel camp at Husby Hole near St Jorgen's Hill in northern Jutland and sent word that anyone who left the camp and went home would not be punished for rebellion. The men from the island of Mors as well as those from Thisted left, for which they were afterwards called cowards and traitors.