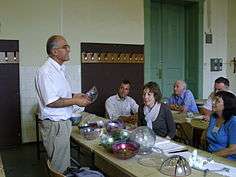 A Lénárt sphere is a teaching and educational research model for spherical geometry. The Lénárt sphere is a modern replacement of a "spherical blackboard".[1] It can be used for use in visualizing spherical polygons (especially triangles) showing the relationships between the sides and the angles. 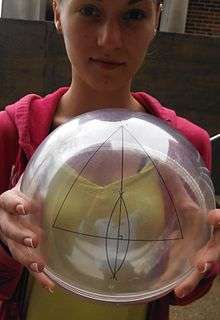 Other products for studying spherical geometry include visualization software programs such as The Geometer's Sketchpad, GeoGebra and Spherical Easel [3](see External Links for Spherical Easel information, and visit List of interactive geometry software for Non Euclid, and many other interactive Projective geometry apps and programs). Where these products only work on a flat plane the Lénárt sphere is giving hands-on experience of spherical geometry

The Lénárt sphere was invented by István Lénárt in Hungary in the early 1990s and its use is described in his 2003 book comparing planar and spherical geometry.[4]

Spherical trigonometry used to be an important mathematics topic from antiquity through the end of World War II, and has been replaced in modern education and (in navigation) with more algorithmic methods as well as GPS, including the Haversine formula, linear algebraic matrix multiplication, and Napier's pentagon. The Lénárt sphere is still widely used throughout Europe in non-Euclidean geometry as well as GIS courses.

The Lénárt sphere is useful in modeling and demonstrating spherical tesselation techniques, especially as they apply to finite analysis problems. Using 3D graphics programs or Python code (see external reference link 8 for open source Python code examples vs. NURBS), greater and greater numbers of polygons can be projected to and from the sphere both for analysis of finite elements, and synthesis of objects and features on the sphere, such as the asteroid ridden planet in the example. In this case, the Lénárt sphere is useful for tesselation (tiling) as a simplification or approximation shortcut to the extremely complex differential math of finite analysis and construction (technically: modeling), especially of animated objects.[5]