Ligi Kuu Bara (Tanzanian Premier League) is the top division of the Football Association of Tanzania, it was created in 1965. The competition was simply known as National League and later First Division Soccer League until the name Premier League was adopted in 1997.

Today the league consists of 16 teams playing a double round-robin. The champion qualifies for the CAF Champions League, the runner-up for the CAF Confederations Cup. The bottom three clubs are relegated to the first division.[1] 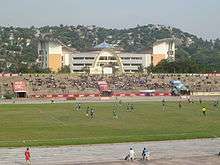