The Ugandan Premier League is the top division of the Federation of Uganda Football Associations. The league was previously known as the 'Uganda Super League' but changed in the 2014-15 season after new management taking over.[1] The league's roots date back to 1968 when the National First Division League was established.[2]

The genesis of club football in Uganda was an idea copied from England by Balamaze Lwanga and Polycarp Kakooza. The objective was to improve Uganda's performances in the Africa Cup of Nations after disappointing results in the finals in 1962 (fourth place finish) and 1968 (lost all three group stage matches), both held in Ethiopia. The intention was to start a Uganda National League (the forerunner of the Uganda Super League) to create the foundation for a strong national team. At the same time, the identification of players from the grassroots would be made easier and systematic.[3]

Because there were no clubs to form a league, institutions and districts were contacted to form teams. The 1968 inaugural top flight league was composed of Prisons, Army, Coffee, Express, Jinja, Masaka, Mbarara, and Mbale. There were three institutions and four districts and one club.[3] The league was known as the National First Division League, and the first league champions were Prisons FC Kampala (now known as Maroons FC).[2]

After four seasons, the political turbulence in Uganda impacted on the league. The 1972 and 1973 championship were not completed because of civil unrest. In 1974, the league became known as the National Football League and this title was used until 1982 when the league was trimmed to ten teams and was renamed the Super League (shortened to Super Ten in that inaugural season).[2]

The emergence of the Super League in 1982 saw the development of SC Villa as the country's leading club. Through the 1980s and a good part of the 1990s, competition between Express, KCC FC and SC Villa lit up the league and fans attended in hoards.[4]

SC Villa won the league for the first time in 1982 and over the next 22 years totalled 16 league titles. KCC FC and Express won the championship title in the intervening years.

In 2003, football in Uganda hit its lowest ebb as SC Villa put 22 goals past Akol FC when the league title went down to goal difference with Express. This was one of the biggest scandals in Ugandan football and thereafter, there was a complete media shutdown in all matters pertaining to local football.[4] Fans became increasingly disillusioned and deserted the stadia thus affecting the teams financially.[5] The episode represented one of many that has plagued Ugandan football.[6]

The 2015–16 FUFA Super League is being contested by 16 teams, including Maroons FC, The Saints FC and Jinja Municipal Council FC who were promoted from the Ugandan Big League at the end of the 2014–15 season. 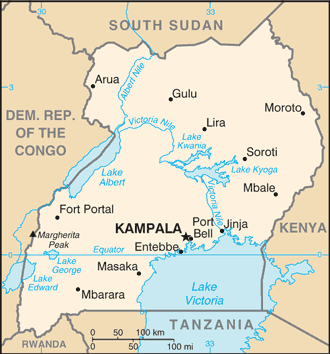 Some of the Kampala clubs may on occasions also play home matches at the Mandela National Stadium. [7]

See 2013–14 Uganda Super League for the league table during the mid-season break.