The Asian Civilisations Museum (ACM) is an institution which forms a part of the four museums in Singapore, the other three being the Peranakan Museum at Old Tao Nan School, the National Museum of Singapore and the Singapore Art Museum.

It is one of the pioneering museums in the region to specialise in pan-Asian cultures and civilisations. The museum specialises in the material history of China, Southeast Asia, South Asia and West Asia, from which the diverse ethnic groups of Singapore trace their ancestry.

The museum first opened at the Old Tao Nan School building on 22 April 1997[1] at Armenian Street, with exhibits largely centred on Chinese civilisation. With the restoration of the Empress Place Building, the museum established its new flagship museum there on 2 March 2003, rapidly expanding the collection to other areas of Asia. The Armenian Street branch closed for renovations on 1 January 2006 and reopened on 25 April 2008 as the Peranakan Museum, specialising in Peranakan culture.

On September 16, 2006, the Museum officially launched its new logo with a new slogan The Asian Civilisations Museum — Where Asian Cultures Come Alive!. This new logo reflects the museum's unique location by the historic Singapore River, the source and origin of Singapore multicultural society, which the ACM presents in its collection. The brown reflected image also alludes to the museum as a place for reflection, while the vibrant orange is an invigorating colour which represents activity and energy.[2]

In late 2013, after undergoing a rebranding exercise, the Museum launched its new logo with a new slogan Singapore's Museum of Asia.[3]

On September 16, 2014, the Museum was named the top museum in Singapore and ranked ninth in Asia by TripAdvisor’s Travellers’ Choice awards. The Museum was the only Singapore museum ranked among Asia’s top 10 museums.[4]

On 15 November 2015, the Museum unveiled its new spaces after it started its revamp in 2014. The revamp is carried out in phases: Phase 1 was unveiled on 14 November 2015. Phase 2 was completed in April 2016, with further enhancements to follow.[5] 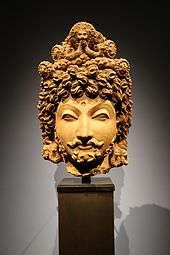 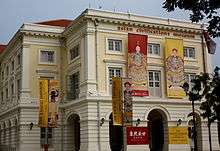 The Chinese collection is represented by fine Dehua porcelain figures, Taoist and Buddhistic statuary, export porcelain, calligraphy and other examples of decorative art.

The South Asian Galleries feature statuary from a broad spectrum of periods including some fine Chola bronzes. Of particularly note is the Chola bronze sculpture of Uma, the consort of Shiva and that of Somaskanda.[6] The early Buddhist art of India is also represented by works hailing from the Mathura and Gandhara schools, including a rare sandstone Mathura Buddha dating to the Kanishka era,[7] and the head of a Gandharan Bodhisattva.[8] Other areas of note include South Indian woodwork, Nepali-Tibetan bronzes, textiles, late medieval miniatures and colonial prints.

The Southeast Asian collections are broad in scope and are rich in ethnological material. Representing the aristocratic art of ancient Southeast Asia are Khmer sculptures, Javanese temple sculpture (some on loan from Leiden), later Buddhist art from Burma/Thailand and the Sinicised temple art of Vietnam. Peranakan gold, textiles, tribal ornament and theatrical masks are other strengths of the collection.

The museum has a restaurant, Empress, featuring traditional Chinese dishes in a contemporary setting, and a cafe, Privé ACM, offering all day dining. There are ballrooms and halls available for functions. The museum shop has souvenirs and a wide range of books on Asian art.