The music of Cambodia is derived from a mesh of cultural traditions dating back to the ancient Khmer Empire, India, China and the original indigenous tribes living in the area before the arrival of Indian and Chinese travelers. With the rapid Westernization of popular music, Cambodian music has incorporated elements from music around the world through globalization.

Cambodian Art music is highly influenced by ancient forms as well as Hindu forms. Religious dancing, many of which depict stories and ancient myths, are common in Cambodian culture. Some dances are accompanied by a pinpeat orchestra, which includes a ching (cymbal), roneat (bamboo xylophone), pai au (flute), sralai (oboe), chapey (bass banjo), gong (bronze gong), tro (fiddle), and various kinds of drums. Each movement the dancer makes refers to a specific idea, including abstract concepts like today (pointing a finger upwards). The 1950s saw a revival in classical dance, led by Queen Sisowath Kossamak Nearyrath. 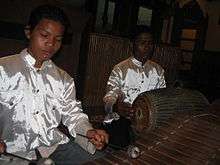 The roneat has been described as a bamboo xylophone. 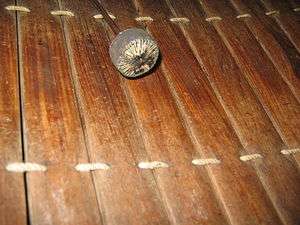 Close-up of the roneat, Cambodia, September 2005

Cambodian pop music, or modern music, includes slow, crooner-type music exemplified by songs such as Sinn Sisamouth's ឯណាទៅឋានសួគ៌? (Ae Na Tiw Than Suor?), as well as dance music. Dance music is classified according to the type of dance signified by the rhythm. The two most common types of Cambodian dance music are ramvong and ramkbach. Ramvong is slow dance music, while ramkbach is closely related to Thai folk music. Recently, a form of music called kantrum has become popular. Originating among the Khmer Surin in Thailand, kantrum is performed by both Thai and Cambodian stars including Darkie and Chalermpol Malakham.

Modern Cambodian music is usually presented in Cambodian karaoke VCDs, which typically feature actors and actresses mimicking song lyrics. Noy Vanneth and Lour Sarith are two examples of modern singers who sing songs on the karaoke VCDs, and the VCDs feature songs composed by other musicians, in addition to songs sung and composed by notable musician Sin Sisamouth. 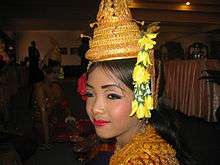 A June 2013 media report revealed that Astronomy Class recorded with Cambodian singer Kak Channthy.[1] The Astronomy Class album Mekong Delta Sunrise was released in late April 2014 and Kennedy completed an interview with the Phnom Penh Post in early May. Kennedy revealed that the initial inspiration for the recording occurred during a six-hour taxi ride in Cambodia in 2012, as old mix tapes played music from the 1960s and 1970s Cambodian music scene in the car stereo. The journalist described Mekong Delta Sunrise as "an album that combines laconic Australian-accented rapping with snippets of Cambodian “golden age” rock ‘n’ roll."[2] When asked about what the group wanted to achieve with the album, Kennedy replied:

What we wanted to cover was our experiences of modern Cambodia and the history of the music that we were referencing. We wanted to try and tell some of the story of the Cambodia of the ’60s and ’70s. We had been excited by the songs that we were hearing and it didn’t feel right to rap just anything over it. We wanted for new listeners to understand something about Cambodia and the music.[2]

Kennedy further explained that samples that appear on the album were taken from a range of sources, such as the Internet, and that a percentage of the proceeds from the album's sales will be given to the families of the musicians whose compositions are sampled, an intention that existed from the outset of the album's creation. Kennedy said that the band will return to Cambodia in 2015 and Astronomy Class "will be making every effort to give back to the families of the people that we’ve sampled".[2]