The music of Laos has evolved ever since the migration of the Tai peoples (which includes the Lao and Thai peoples) out of China into present day Laos, where cross-pollination with the indigenous music of the region, as well as importation of Chinese and Mon-Khmer influences, has had a pronounced effect on the instrumentation and melodies of the various forms of music that now exists in Laos. The most popular form of traditional Lao music is mor lam.

Today, Laos lacks a robust music industry. Much of the Lao music produced today comes from Thailand, where many forms of Lao music, particularly mor lam, enjoy massive popularity due to very similar languages and lifestyles.

Lao folk music, known as Lam, is extemporaneous singing accompanied by the khene. The Lao people also like to listen to some popular African music. 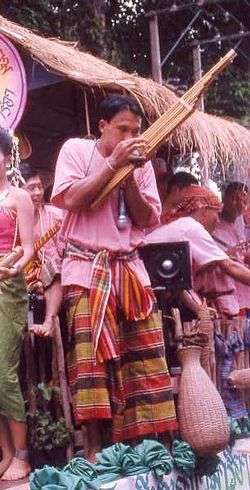 A khene player in Isan.

Ensembles typically include two singers (mor lam, the same term referring to the genre of music) - one male and one female -, a khene player (mor khaen), and other instruments including fiddles, flutes and bells. Music varies widely across Laos, with the lam saravane style being most popular, while the city of Luang Prabang is known for a slow form called khaplam wai. An extremely popular form developed in Thailand is called mor lam sing, and is faster and electrified.

In the 1960s, Thai lam nu and lam ploen contributed to the development of lam luang, which is a form of song (and dance) which often has narrative lyrics.