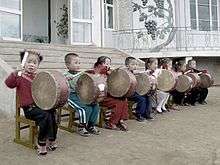 Music of North Korea is heavily influenced by the political situation in the country. Many songs are related to the North Korean cult of personality.

After the division of Korea in 1945 and the establishment of North Korea in 1948, revolutionary song-writing traditions were channeled into support for the state, eventually becoming a style of patriotic song called taejung kayo in the 1980s[1] combining classical Western symphonic music and Korean traditional musical forms.[2] The songs are generally sung by female performers with accompanying bands or choirs accompanied by a large orchestra (either Western style or a hybrid of western and traditional) or concert band.

North Korean music follows the principles of Juche (self-reliance) ideology. The characteristic march like, upbeat music of North Korea is carefully composed, rarely individually performed, and its lyrics and imagery have a clear optimistic, socialist content.

Much music is composed for movies, and the works of the Korean composer Isang Yun (1917-1995), who spent much of his life in Germany, are popular in North Korea.

Performance at a Pyongyang opera

Under Kim Il-sung's era, only ideologically correct music was allowed. Jazz in particular was considered out of bounds. Many artists however found their way around these limitations by writing ideologically correct lyrics while taking liberties with the score. Under Kim Jong-il, previously forbidden genres, even jazz, became permissible and encouraged.[3]

Many North Korean pop songs are usually performed by a young female singer with an electric ensemble, percussionist, and accompanying singers and dancers. Some North Korean pop songs such as "Hwiparam" ("Whistle")—set to the lyrics of North Korean poet Cho Ki-chon[4]—have become popular in South Korea.[5] They are primarily influenced by Korean pop music and songs have titles like "Don't Ask My Name", "Our Life Is Precisely a Song", "We Shall Hold Bayonets More Firmly", "The Joy of Bumper Harvest Overflows Amidst the Song of Mechanisation",[6] "The Dear General Uses Distance-Shrinking Magic" (Chukjibeop),[7] "Song of Bean Paste", "My Country Full of Happiness", "Pleasant Snack Time", "I Also Raise Chickens", "The Shoes My Brother Bought Fit Me Tight",[8] "Potato Pride"[9] and many more.

Songs like "We Are One" and "Reunification Rainbow" sing of the hopes for Korean reunification. In 2012, North Korea's first girl band, the Moranbong Band, made their world debut.[10] They are a group of about sixteen North Korean women (eleven instrumentalists and five singers) who were hand-selected by Kim Jong-un.[11]

BBC radio disc jockey Andy Kershaw noted, on a visit to North Korea, that the only recordings available were by the pop singers Jon Hye-yong, Kim Kwang-suk, Jo Kum-hwa and Ri Pun-hui, and the groups Wangjaesan Light Music Band, the Mansudae Art Troupe and the Pochonbo Electronic Ensemble, who play in a style Kershaw refers to as "light instrumental with popular vocal".[6] There is also the State Symphony Orchestra, the Sea of Blood Opera Company, two choruses, an orchestra and an ensemble dedicated to Isang Yun's compositions, all in Pyongyang. The Pyongyang Film Studios also produces many instrumental songs for its films, and several programs on Korean Central Television have music made and performed by the Central Radio and Television Orchestra.

North Korean pop music is available for visitors to Pyongyang at the Koryo Hotel or Number One Department Store.[8]

Some religious or original folk music may still exist in North Korea, but reliable sources are absent in the West.

Like Korean music in general, North Korean music includes kinds of both folk and classical, courtly music, including genres like sanjo, pansori, and nongak. Pansori is long vocal and percussive music played by one singer and one drummer. The lyrics tell one of five different stories, but is individualized by each performer, often with updated jokes and audience participation. Nongak is a rural form of percussion music, typically played by twenty to thirty performers. Sanjo is entirely instrumental that shifts rhythms and melodic modes during the song. Instruments include the changgo drum set against a melodic instrument, such as the gayageum or ajaeng.[6]

In North Korea, traditional instruments have been adapted in order to allow them to compete with Western instruments. Many older musical forms remain and are used in both traditional performances that have been attuned to the ideas and the way of life of the modern North Korean communist state and to accompany modern songs in praise of Kim Il-sung, his son and successor, Kim Jong-il, and Kim Jong-un from 2012 onward, plus songs that wish for a reunited Korea, thus creating a mix of traditional and Western music that is truly North Korean, a unique variant of Korean music as a whole mixing the old and the new.

Military music, in contrast, often makes extensive use of Western brass, woodwind, and percussion instruments, often omitting the Korean ones entirely. Although usually original compositions, the melodies are not easily distinguishable from Western ones in the absence of their lyrics, which heavily feature the customary ideologically oriented content.