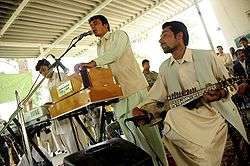 Music has always been a part of Afghans' lives but since the late 1970s the country has been involved in constant wars and people were less concerned about music. As such, music in Afghanistan has been suppressed and recording for outsiders is minimal, despite a rich musical heritage.

Located on the crossroads between many trade routes, Afghanistan's music tradition was influenced by Arabs, Persians, Indians, Mongolians, Chinese and many others passing through. Thus Afghan music features a mix of Persian melodies, Arab scales, Indian compositional principles as well as sounds from ethnic groups such as the Pashtuns or Tajiks and the instruments used range from Indian tablas to long-necked lutes.

During the 1990s, the Taliban governments banned instrumental music and much public music-making.[1] In spite of arrests and destruction of musical instruments, musicians have continued to ply their trade into the present. The multi-ethnic city of Kabul has long been the regional cultural capital, but outsiders have tended to focus on the city of Herat, which is home to traditions more closely related to Iranian music than in the rest of the country.[2] Lyrics throughout most of Afghanistan are typically in Dari (Persian) and Pashto.

The Afghan concept of music is closely associated with instruments, and thus unaccompanied religious singing is not considered music. Koran recitation is an important kind of unaccompanied religious performance, as is the ecstatic Zikr ritual of the Sufis which uses songs called na't, and the Shi'a solo and group singing styles like mursia, manqasat, nowheh and rowzeh. The Chishti Sufi sect of Kabul is an exception in that they use instruments like the rubab, tabla and harmonium in their worship; this music is called tatti ("food for the soul").[3]

The classical musical form of Afghanistan is called klasik, which includes both instrumental and vocal and belly dancing ragas, as well as Tarana and Ghazals.[4] Many Ustads, or professional musicians, have learned North Indian classical music in India, and some of them were Indian descendants who moved from India to the royal court in Kabul in the 1860s.[3] They maintain cultural and personal ties with India—through discipleship or intermarriage—and they use the Hindustani musical theories and terminology, for example raga (melodic form) and tala (rhythmic cycle).

Afghan ragas, in contrast to Indian ones, tend to be more focused on rhythm, and are usually played with the tabla, or the local zerbaghali, dayra or dohol, all percussive instruments.[4] Other Afghan classical instruments include the dutar, sorna, sitar, dilruba, tambur, ghichak, and Rubab.

Afghanistan's classical singers include the late Ustad Mohammad Hussain Sarahang (1924-1983), who is one of the master singers of Patiala Gharana in North Indian classical music and is also well known throughout India and Pakistan as a contemporary of Ustad Bade Ghulam Ali Khan. His composition "Pai Ashk" was used in the theme song of the Hindi film Mera Saya. Ubaidullah Jan Kandaharai is regarded as the king of Pashto music in the southern Afghanistan region. He died in the 1980s but his music is still very much enjoyed by the Pashtun diaspora around the world, mainly by the Pashtuns in the Kandahar-Quetta regions. Other classical singers are Ustad Qasim, Ustad Rahim Bakhsh, and Ustad Nato.

The rubab is a common lute-like instrument in Afghanistan, and is the forerunner of the Indian sarod.[2] The rubab is sometimes considered the national instrument of Afghanistan, and is called the "lion of instruments";[5] one reviewer claims it sounds like "a Middle Eastern predecessor to the blues that popped up in the Piedmont 100 years ago".[6] The rubab has a double-chambered body carved from mulberry wood, which is chosen to give the instrument its distinct timbre. It has three main strings and a plectrum made from ivory, bone or wood.

The dombura is a popular folk instrument, particularly among the northern Tajiks and the Hazaras in the central part of the country. Notable Afghan dombura players include Dilagha Surood, Naseer Parwani, Mir Maftoon, Safdar Tawkloi and Rajab Haideri. The dombura is played with much banging and scratching on the instrument to help give a percussive sound. The two strings are made of nylon (in modern times) or gut. They cross a short bridge to a pin at the other end of the body. There is a tiny sound hole in the back of the instrument, while the top is thick wood. It is not finished with any varnish, filing or sanding of any kind, and as with all other Afghan instruments there is some decoration.[7] 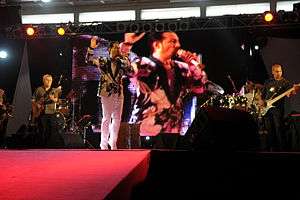 Farhad Darya performing at a concert in Kabul, Afghanistan. 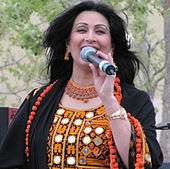 In 1925, Afghanistan began radio broadcasting, but its station was destroyed in 1929. Broadcasting did not resume until Radio Kabul opened in 1940.[8] As Radio Afghanistan reached the entire country, popular music grew more important. In 1951, Parwin became the first Afghan woman to sing live in Radio. Farida Mahwash, one of the famous female singers who then gained the title of Ustad (Master), had a major hit with "O bacheh" in 1977; she was "perhaps the most notable" of pop singers.[9]

Modern popular music did not arise until the 1950s when radio became commonplace in the country. They used orchestras featuring both Afghan and Indian instruments, as well as European clarinets, guitars and violins. The 1970s were the golden age of Afghanistan's music industry. Popular music also included Indian and Pakistani cinema film and music imported from Iran, Tajikistan, the Arab world and elsewhere.[3]

There is also a thriving Afghan music industry in neighboring Pakistan, primarily located in the cities of Peshawer, Karachi and the capital city, Islamabad. Much of the Afghan music industry was preserved via circulation in Pakistan and the holding of concerts for Afghan performers there which helped to keep the industry alive. Afghan performers regularly perform on Pakistani television programs and hold concerts throughout the country for the estimated 3-4 million Afghans that still live there.

Since the 2001 US intervention in Afghanistan and the removal of the Taliban, the music scene has begun to re-emerge. Some groups, like the Kaboul Ensemble, have gained an international reputation.[1] In addition, traditional Pashtun music (especially in the southeast of the country) has entered a period of "golden years", according to a prominent spokesman for Afghan Ministry of Interior, Lutfullah Mashal.[10]

Pop music emerged in Afghanistan during the 1950s, and became very popular until the late 1970s. What helped the emergence of pop music in Afghanistan were amateur singers from non-traditional music backgrounds who wanted to showcase their talents in the studio (Radio Kabul). These singers were from middle- to upper-class families and were more educated than singers from traditional music backgrounds.

Rock music is slow to gain a foothold in the country, and Kabul Dreams is one of the few Afghan rock bands; formed in 2008 by ex-pats, they claim to be the first one.[11]

Afghan hip hop is a type of music popular among Afghanistan's youth and immigrant community.[12] It inherits much of the style of traditional hip hop, but puts added emphasis on rare cultural sounds. Afghan hip hop is mostly sung in Dari (Persian), Pashto, and English. One popular hip hop artist is DJ Besho (Bezhan Zafarmal), a resident of Kabul. Another is 'Awesome Qasim', who is known in Canada and raps in Farsi, Pashto, and English. Qasim's most recent album came out in February 2013 in Canada.[13][14] Kabul musician Soosan Firooz has been described as Afghanistan's first female rapper.[15] Sonita Alizadeh is another female Afghan rapper, who has gained notoriety for writing music protesting forced marriages.[16]