The music of Palestine (Arabic: الموسيقى الفلسطينية‎‎) is one of many regional subgenres of Arabic music. While it shares much in common with Arabic music, both structurally and instrumentally, there are musical forms and subject matter that are distinctively Palestinian.[1] 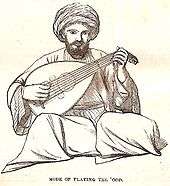 In the areas now controlled by both Israel and the Palestinian National Authority, multiple ethnic groups and religions have long held on to a diversity of cultures. Palestinians (including Druze and Bedouin) constituted the largest group, followed by Jews (including Sephardim and Ashkenazim), Egyptians, Cypriots, Samaritans, Circassians Armenians, Dom, and others. Wasif Jawhariyyeh was one oud player, famous for his post 1904-diary.

Early in the 20th century, Palestinians lived in rural areas, either as farmers or as nomads. The fellahin (farmers) sang a variety of work songs, used for tasks like fishing, shepherding, harvesting and making olive oil. Traveling storytellers and musicians called zajaleen were also common, known for their epic tales. Weddings were also home to distinctive music, especially the dabke, a complex dance performed by linked groups of dancers. Popular songs made use of widely varying forms, particularly the mejana and dal'ona. 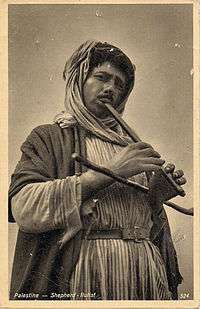 After the creation of Israel in 1948, large numbers of Arab Palestinians fled to, or were forced into, refugee camps in the West Bank and Gaza Strip. The most popular recorded musicians at the time were the superstars of Arab classical music, especially Umm Kulthum and Sayed Darwish. The centers for Palestinian music were in the Palestinian (now Israeli) towns of Nazareth and Haifa, where performers composed in the classical styles of Cairo and Damascus. A shared Palestinian identity was reflected in a new wave of performers who emerged with distinctively Palestinian themes, relating to the dreams of statehood and the burgeoning nationalist sentiment.

In the 1970s, a new wave of popular Palestinian stars emerged, including Sabreen and Al Ashiqeen. After the 1987 First Intifada, a more hard-edged group of performers and songwriters emerged, such as al- Funoun, songwriter Suhail Khoury, songwriter Jameel al-Sayih, Thaer Barghouti's Doleh and Sabreen's Mawt a'nabi.

In the 1990s, the Palestinian National Authority was established, and Palestinian cultural expression began to stabilize. Wedding bands, which had all but disappeared during the fighting, reappeared to perform popular Egyptian and Lebanese songs. Other performers to emerge later in the 90s included Yuad, Washem, Mohsen Subhi, Adel Salameh, Issa Boulos, Wissam Joubran, Samir Joubran, and Basel Zayed with his new sound of Palestine and Turab group founded in 2004 with the CD Hada Liel.

The Diaspora Palestinian Reem Kelani is one of the foremost researchers and performers in the present day of music with a specifically Palestinian narrative and heritage.[3] Her 2006 debut solo album Sprinting Gazelle – Palestinian Songs from the Motherland and the Diaspora comprised Kelani's research and arrangement of 5 traditional Palestinian songs, whilst the other 5 songs were her own musical settings of popular and resistance poetry by the likes of Mahmoud Darwish, Salma Khadra Jayyusi, Rashid Husain and Mahmoud Salim al-Hout.[4] All the songs on the album relate to 'pre-1948 Palestine'.

A large part of Palestinian music includes wedding songs and dancers. Due to the large amount of weddings in Palestinian culture, wedding singers have been able to maintain the tradition of Palestinian songs whilst incorporating modern vocals and rhythms. Wedding singers draw from a repertoire of ceremonial material including henna songs sung at the henna ceremony, wedding processionals (zeffat), and popular debkah and dance songs.

Palestinian music reflects Palestinian experience.[5] As might be expected, much of it deals with the struggle with Israel, the longing for peace, and the love of the land of Palestine. A typical example of such a song is Baladi, Baladi (My Country, My Country), which has become the unofficial Palestinian national anthem:

Palestine, Land of the fathers, To you, I do not doubt, I will return. Struggle, revolution, do not die, For the storm is on the land.[6]

Zareef et Tool is one of the most popular Palestinian songs of today and can be traced back decades. The song encourages Palestinians not to leave their homeland.:[7]

O, elegant and tall one stop so I can tell you You are going abroad and your country is better for you I am afraid you will get established there And find someone else and forget me

Unlike many other cultures, traditional Palestinian songs have no set lyrics but rather a set rhythm to them. The singers are usually family members or close friends that make up the lyrics on the spot. At modern Palestinian events there may be a professional singer but the forms mentioned below, still very popular today, were created before the popularization of professional singers. Therefore, the song lyrics differ from city to city. Many types of Palestinian songs, including Atab/Mejana and Dal'ona, have transcended time. Due to the relevance of the subject matter and the need to maintain tradition and culture, traditional types of Palestinian songs can still be heard at events of today, such as weddings or gatherings. They still remain extremely popular throughout the Palestinian culture. These forms of songs include:[7]

Beginning in the late 1990s, Palestinian youth forged a new Palestinian musical subgenre – Palestinian rap or hip hop – which blends Arabic melodies and Western beats, with lyrics in Arabic, English and even Hebrew.

Borrowing from traditional rap music that first emerged in the ghettos of Los Angeles and New York in the 1970s, "young Palestinian musicians have tailored the style to express their own grievances with the social and political climate in which they live and work"[8]

DAM were pioneers in forging this blend. As Arab citizens of Israel, they rap in Arabic, Hebrew, and English often challenging stereotypes about Palestinians and Arabs head-on in songs like "Meen Erhabe?" ("Who's a terrorist?")

More peculiar is the West Bank group Ramallah Underground, found by the two brothers Aswatt, Boikutt and Stormtrap. Their sound is a mix of hip hop, trip hop, downtempo alongside traditional Arab music.

According to the human rights organization Freemuse, Palestinian musicians feared the same was going to happen in the Palestinian territories where Islamic fundamentalists have become increasingly assertive since the militant Hamas group scored political gains in the Palestinian Authority local elections of 2005.[9]

In 2005 an outdoor music and dance performances in Qalqiliya were suddenly banned by the Hamas led municipality, for the reason that such an event would be forbidden by Islam. The municipality also ordered that music no longer be played in the Qalqiliya zoo, and mufti Akrameh Sabri issued a religious edict affirming the municipality decision.[9][10] In response, the Palestinian national poet Mahmoud Darwish warned that "There are Taliban-type elements in our society, and this is a very dangerous sign".[9][10][11][12]

The Palestinian columnist Mohammed Abd Al-Hamid, a resident of Ramallah, warned that this religious coercion could cause the migration of artists, and said "The religious fanatics in Algeria destroyed every cultural symbol, shattered statues and rare works of art and liquidated intellectuals and artists, reporters and authors, ballet dancers and singers – are we going to imitate the Algerian and Afghani examples?"[10]

Musicians and instruments from palestine, anno 1860