Music of the Maldives

The Maldives are an island nation in the Indian Ocean, and its music is marked mainly by Indian, East African, and Arab influences. 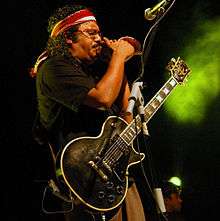 Nashid performing at the Zero Degree Atoll reunion show "Sound of a Nation" at Alimas Carnival in Male'.

The most widely known form of indigenous music is called boduberu. It is also the most popular, especially in the Northern Atolls. It is said to have appeared in the Maldives in about the 11th century, and that it may have East African origins. It is a dance music, performed by about fifteen people, including a lead singer and three percussionists, as well as a bell and a small stick of bamboo with horizontal grooves called an onugandu.

Boduberu songs begin with a slow beat, which eventually enters a frenetic crescendo accompanied by frenetic dancing. Lyrics can be about any number of subjects, and often include vocables (meaningless syllables).

Thaara music is performed by about 22 people seated in two rows opposite each other. It is performed only by men, and is somewhat religious in nature. Like boduberu, thaara songs begin slowly and come to a peak. Thaara is said to have arrived with Arabs who came from the Persian Gulf in the middle of the 17th century.

Gaa odi lava is a special type of song performed after the completion of manual labor. It was said to have been invented during the reign of Sultan Mohamed Imadudeen I (1620–1648), for the workers who built defenses for the city of Malé.

In the early 20th century, Sultan Muhammad Shamsuddeen III ruled the Maldives and the youth developed a form of music called langiri, using thaara as the major source and modifying its performance.

The bolimalaafath neshun is a dance performed by women on special occasions or when giving gifts to the sultan. These gifts, most often shells, are kept in an intricately decorated box or vase called the kurandi malaafath. About twenty-four women typically participate, in small groups of two to six. They march towards the sultan singing songs of patriotism or loyalty. Since becoming a republic in 1968, this dance is no longer performed for any sultan, since one no longer exists.

Another women's dance is called maafathi neshun, which is similar to langiri. It is performed by women dancing in two rows of ten each, carrying a semi-circular string with fake flowers attached.

A dance called fathigandu jehun is performed by either one person or a group of men, using two pieces of short bamboo sticks to accompany the dancers and a drummer, who also sings. These songs are typically epics, most famously one called Burunee Raivaru.

Bandiyaa jehun is perhaps related to the Indian pot dance, and is performed by women. Dancers mark the beat with a metal water pot, while wearing metal rings. Modern groups perform either standing or sitting, and have added drums and harmonicas.

Kulhudhuffushi (on Haa Dhaalu Atoll) is known for kadhaamaali, which is performed with numerous drums and a kadhaa, which is made of a copper plate and rod. About thirty men take part, dressed in costumes of evil spirits (maali). Kadhaamaali is associated with a traditional walk around the island late at night by the elders, in order to ward of maali. This walk lasted for three days, followed by music and dancing.

Maldivians feel some affinity to Northern India through their language, which is related to the languages of North India. Most older generation or traditional Maldivians like to watch Hindi movies from the 1960s or 70s, and like to listen to the songs of those movies. The reason is that out of a similar language, similar rhythms and cadences develop. In fact, it is very easy for Maldivians to fit local lyrics to a Hindi tune because of this cultural closeness. For example, the Hindi words Ek din ("one day") are changed to E kudin (those kids) in Dhivehi, and in this manner a new local song develops.

Before cable TV, the most popular radio programmes from the Voice of Maldives (VOM) were those broadcasting older Hindi songs, like Vakivumuge kurin ("Before the breakup"). On rural islands, Hindi songs are still the most popular songs, especially the older ones from Mohammed Rafi, Mukesh, Lata Mangeshkar, Asha Bhonsle, Hemant Kumar and Kishore Kumar. Therefore, most popular Maldivian songs are based in (or influenced by) Hindi songs.

The favorite musical instrument of Maldivians, besides the drum, is the bulbul tarang, a kind of horizontal accordion. This instrument is also used to accompany devotional songs, like Maadhaha. Singers like Naifaru Dohokko became famous through songs with bulbul music in the background. The first bulbuls were brought from Calcutta in the early 19th century. Influences from North Indian music and dances date back to that time. They didn't begin broadcasting Hindi songs by radio until the 1960s and 70s.

There are also female singers producing traditional songs; among them, the most popular were Fareeda Hasan and Jēmuge Donkamanaa, whose songs continue to be cherished by Maldivians, although both women have died.

Formerly in the islands of Maldives, there was a festival called Maulūdu, where religious songs were sung by groups of males within a pavilion (haruge) specially built for the occasion. When a Maulūd was arranged, local islanders had to build a large, open-sided pavilion with wooden poles. They would thatch it with coconut-palm fronds, and decorate it with oil lamps and special patchwork draperies. The day of the event, special food would be prepared, and beautifully displayed for the benefit of the Maulūd singers and a great number of guests coming from their rival island (or village), in their best dresses, on festively decorated boats. Here the host islanders had to prove themselves hospitable in the preparations and accommodation, in order to be able to compare favorably when it was their own turn to receive hospitality in the rival island on a similar occasion. Another name for religious songs is madaha.

Hussain Shihab, formerly a musician and now the minister of state for arts, wrote a song to a foreign tune. This song was named hiy Adhu Roneeyey Nudhashey, which he admitted in a program broadcast on the anniversary of Television Maldives (TVM). Western music is more popular in the capital, as in any global city.

However, popular music has shifted from plagiarizing to more original concepts. The Dhivehi band Zero Degree Atoll released an album named Dhoni ("Traditional Maldivian Boat"). This album had roots in folk and ancient arts such as Raivaru, a type of traditional poetry, where letters are swapped to be sung in a certain melody. The album was a huge success, followed by its remake with few new songs in 1997, the album titled Island Pulse recorded in France. The band had a huge impact on the local population, which unofficially claimed it as the saviors of traditional Dhivehi musical art and the pioneers of modern Dhivehi music. And another famous band is Trio Band. Trio Band first performance on Dhanberu Live show known by Chaaley song, raarukuga and Ey manjey. Trio band has its own unique style as a young band. Lately they become boduberu style. Trio Band Lead Vocal is Moosa Shifau. Many other bands and local performers have kept up tradition. It is believed that the state sponsored radio and TV grew more in favor of foreign music, when most quintessential Dhivehi musicians started including political content in their lyrics. Such lyricists include Easa of Sea Child, unofficially considered the Bob Dylan of modern Dhivehi music, who was jailed for drug related issues. Although Easa is not regarded professionally, many of his songs have been stolen and sung. While serving time at Maafushi, he is said to have written more than a hundred songs. Songs such as Jamalegge Soora ("face of a camel"), Filavalhu ("lesson"), Fangivinun (a collaboration of folk and an original Raivaru), Insaana ("the Human") and Govaali Adu are very prominent among musicians, and in the underground music scene.