The territory previously covered by Nagar forms three tehsils of the Nagar District of Northern Pakistan.

Nagar, founded in the fourteenth century, was an autonomous principality until the British gained control of the state following the Hunza–Nagar Campaign (1889-1893). It was a princely state until 1947, but since 1868 a vassal of the Maharaja(Jammu and) Kashmir despite never being directly ruled by Kashmir. The rulers of Nagar were considered to be amongst the most loyal vassals of the Maharajas of Jammu and Kashmir sending annual tributes to their Durbars until 1947.

In November 1947, Nagar acceded to Pakistan, which became responsible for its external affairs and defense, while Nagar maintained internal self-government. In 1968, Syed Yahya Shah, the first educated politician of the valley, demanded civil rights from the Mir of Nagar. In 1974, when Ayub Khan's dictatorship ended in Pakistan and the Pakistan People's Party (under Zulfiqar Ali Bhutto) was elected, the government forced the Mir of Nagar to abdicate. The area was then merged with the Northern Areas.[1] 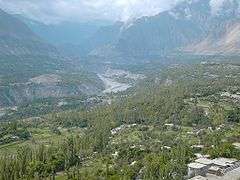 The Hunza valley looking across the river to Nagar

The state was governed by the hereditary rulers of the Maglot dynasty, who were styled as Mir. The details of these early rulers are uncertain; the first definite dates available are from 1839. In November 1947, the state became one of the princely states of Pakistan. Brigadier Mir Shaukat Ali Khan was the last ruler of the State before it was abolished by Pakistani PM Zulfiqar Ali Bhutto in 1972.

The Mir was assisted by a council of Wazirs or Ministers who were selected from a family from Khutayating. Wazir Taifor Shah and his son Wazir Malik Shah were among the most powerful of those ministers. At the time of Wazir Malik Shah's death, his son being too young to assume his father's ministry, the responsibility was divided among three men: Wazir Enayat Ali from Potikuz, Wazir Behlol from Khutayating and Wazir Sarwar from Chalt Chaprote.

Nagar is home to two main ethnic groups – the Burushaski speakers and the Shina speakers. An older type of Burushaski is still spoken in the valley with a mild modern accent. A third language, Bedeski, is also still spoken in Chalt Nagar.

The terrain of Nagar is extremely mountainous, which provided a certain degree of protection against invading forces. The highest mountain is the 7,788 m (25,551 ft) Mount Rakaposhi, south of the town of Nagar. The Karakoram Highway crosses Nagar, connecting Pakistan with China via the Khunjerab Pass. The road follows the Hunza river for some distance through Nagar and into the Hunza region.

The Nagar villages are mainly populated by farmers, hunters and fishermen.