This article is about the former State of Las Bela. For other uses, see Lasbela (disambiguation). 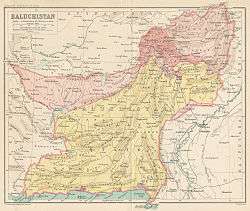 Las Bela (Urdu: ریاست لسبیلہ) was a princely state in a subsidiary alliance with British India (later a princely state of Pakistan) which existed until 1955. The state occupied an area of 18,254 km2 (7,048 sq mi) in the extreme southeast of the Balochistan region, with an extensive coastline on the Arabian Sea to the south. Las Bela was bordered by the princely states of Kalat and Makran to the north and west. To the east lay the province of Sind and to the southeast lay the Federal Capital Territory around the city of Karachi.

The State of Las Bela was founded in 1742 by Jam Ali Khan I. His descendants ruled Las Bela until 1955 when the state became part of West Pakistan. The statement of Ghulam Qadir Khan the last Jam of Las Bela on signing the accession was:

We hold historical ties with Sindh and share strongest cultural bond with the Province. Our People have accepted Jinnah sahab as the leader of new Muslim homeland and we vote to emerge in Pakistan.

For a period of three years between 3 October 1952 and 14 October 1955, Las Bela was part of the Baluchistan States Union but retained internal autonomy. In 1955, Las Bela was incorporated into the new province of West Pakistan and became part of Kalat division. In 1962, the area of Las Bela was detached from Kalat division and merged with the former Federal Capital Territory to form the division of Karachi-Bela. When the provincial system was changed in 1970, Las Bela became part of the new province of Balochistan.

Las Bela has a hot, dry tropical desert climate. It is only a few degrees north of the Tropic of Cancer. The sea breezes though make the weather less extreme than inland Balochistan, where 50 °C (122 °F) in the summer.

The hereditary rulers of Las Bela were styled as Jam Sahib. The Samma Dynasty took the title of Jam, the local equivalent of "King" or "Sultan".

Prominent members of the family after the end of the princely state included: