This article is about the former State of Khairpur. For other uses, see Khairpur (disambiguation).

The State of Khairpur (Sindhi: خيرپور رياست‎، Urdu: ریاست خیرپور‎), also transliterated as Khairpur[1] [2] or Khayrpur, was a princely state on the Indus River in modern-day Sindh, Pakistan, with its capital city at Khairpur. The state was counted amongst the Rajputana states (now Rajasthan in India) to the east. It was a Princely state of Pakistan from 1947 until its end in 1955. 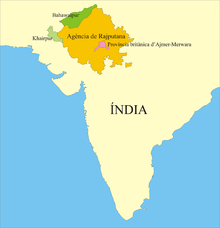 The history of the state of Khairpur is bound up with that of the Talpur clan and its rule over Sind. The origins of the state date back to the disputes over the succession to the leadership of the clan, following the murder of its chief, Mir Bahram Khan in 1775. The clan then revolted against the Kalhoras of Sind, taking control of various parts of the kingdom and eventually replacing them as rulers.

Mir Sohrab Khan Talpur had established control over Upper Sind by 1783. He established his capital at Burahan, which he renamed Khairpur in 1786 and extended his territories over a vast area, eventually helping his kinsmen from Hyderabad to expel the Afghans from the province by 1823. As early as 1811, he divided his territories into three emirates, each ruled by one of his sons, but with his eldest invested as principal amir. To them he left the day-to-day affairs of administration and retired to the Fort of Ahmedabad, in Diji. There, he took a new wife and raised a family, to whom he intended to bequeath a portion of his realm. This incurred the jealousy of his adult grandsons, especially those of his second son, Mubarak 'Ali.

The death of Sohrab in 1830 left his eldest son Mir Rustam 'Ali Khan, in full though precarious control over Upper Sind. His position had been little more than that of a regent during his father's lifetime, and this was to remain unchanged until his youngest half brother, 'Ali Murad, came of age. Unwilling to surrender power to him, Rustam sought to strengthen his position by entering into treaty relations with the British in 1832. He secured their recognition as an independent ruler, but surrendered control over external relations to them in April 1838, followed by full British protection later that year. Nevertheless, this did not save him from internal family disputes, in which the British initially refused to treat or take sides. However, the contest between 'Ali Murad, the youngest brother and the sons of Mir Mubarak 'Ali, culminated in victory for the latter. Peace was finally established in 1842 through a negotiated settlement, resulting in Rustam abdicating in favour of his youngest brother.

Mir 'Ali Murad was a forceful personality, who mistrusted the British for siding with his eldest half-brother in 1832. Nevertheless, he imbued himself with a sense of realism and attempted to co-operate whenever his interests or inclinations did not supervene. He honoured the alliance by assisting the East India Company during the Turki Campaign in 1847, but blotted his copybook by intriguing against them in 1851-1852. Accused of deception and fraud, he was stripped of most of his territories in Upper Sind in 1852 and left with little more than his original emirate including Khairpur and its surrounding lands. Despite this setback, he co-operated faithfully with the British during the 1857 Mutiny five years later, making sure that they dealt with any insurrection occurring within his jurisdiction. At his death in 1894, after a long reign of fifty-two years, he had become an honoured and respected ruler of the empire.

The eldest son of 'Ali Murad having predeceased him, he was succeeded by his second son, Mir Faiz Muhammad Khan. His reign and those of his son and grandson were relatively short and uneventful. The last died in 1935 leaving an only son, Mir Faiz Muhammad Khan II, who had suffered from an unstable and nervous affliction for many years—so much so that he could not be trusted with the management of state affairs. The government instituted a council of regency under local ministers and ordered the Mir to live outside the state. After a period of twelve years, and shortly before the transfer of power, he abdicated in favour of his minor son in July 1947. The state acceded to the Dominion of Pakistan in October that year, and merged into West Pakistan in 1955. The young Mir had reached his majority and received full ruling powers only four years earlier. The state was the first on the sub-continent to introduce full adult suffrage. His subjects enjoyed free education up to matriculation standard and free healthcare, there were no customs duties, property, income or wealth taxes. The crime rate remained negligible, and light industries flourished.

Mir 'Ali Murad Khan II remains one of the few surviving first class rulers of the old Indian Empire, still holding a public Majlis every Muharram at his sprawling palace, Faiz Mahal. He has long taken a keen interest in animal welfare and conservation, having established one of the largest private wildlife sanctuaries on the sub-continent. His younger son, Prince Mehdi Raza Khan, continues his father's passion and oversees his conservation interests since retirement.

The form of government was traditional monarchy. The ruler held the title of "Mir" and ruled with the assistance of a diwan or Wazir who at times was an official borrowed from the Indian Civil Service. The state was sub-divided into five taluks grouped into two sub-divisions. They are the Khairpur sub-division comprising the Khairpur and Gambat taluks and the Mir Wah sub-division comprising Mir Wah, Faiz Ganj and Naro taluks. The two sub-divisions were administered by a naib-wazir each while mukthiarkars were incharge of the taluks. The external relations of the state were in the control of a political agent who was usually the District Collector of Sukkur.