Osaka Prefecture University (大阪府立大学, Ōsaka furitsu daigaku) (OPU), also abbreviated to Fudai (府大), is one of the largest public universities in Japan. The main campus is among big Kofun tombs in Sakai, Osaka. UOP was originally established in 1949 as Naniwa University (浪速大学: Naniwa is the classical name for Osaka) by mingling several national and public technical colleges. Among them was Osaka National College of Engineering (官立大阪工業専門学校). Since then the faculties in the field of engineering have been very competitive. In 1955 the university was renamed University of Osaka Prefecture (Japanese name for the university has not been changed since 1955). 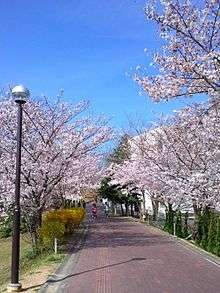 The history of the precedent colleges of Naniwa University (NU) is as follows:

In 1883, the prefectural government founded the Veterinary Training Institute (獣医学講習所, Jūigaku kōshūjo) attached to Osaka Prefectural Medical School.[3] In 1888, the institute was moved to Osaka Prefectural School of Agriculture (大阪府立農学校, Ōsaka furitsu nōgakkō) in Sakai, which had two courses of agriculture and veterinary science. In 1942, during World War II, the course for Veterinary Medicine was reorganized into Osaka Higher School of Veterinary Medicine (大阪高等獣医学校), which was renamed Osaka College of Veterinary Medicine and Animal Husbandry (大阪獣医畜産専門学校) in 1945. This prefectural college, together with Osaka Agricultural College (大阪農業専門学校, established in 1944 in Ikeda), constituted NU Faculty of Agriculture (now OPU Graduate School of Life and Environmental Sciences/School of Life and Environmental Sciences).

Still other origin was established as Osaka Youth Normal School (a national college: 官立大阪青年師範学校) in 1944. This teachers college constituted NU Faculty of Education, which was later abolished and reorganized into Division of Liberal Arts (now OPU Faculty of Liberal Arts and Sciences).

The Junior College of Agriculture, University of Osaka Prefecture (大阪府立大学農業短期大学部, Osaka Furitsu Daigaku Nogyo Tanki Daigakubu) was a junior college in Mihara-ku, Sakai. It was established in 1953, and closed in 1964. It offered courses in agriculture and food chemistry.

OWU was established in 1949 by developing Osaka Prefecture Women's College, which was established in 1924 under old educational systems (the second oldest public women's college in Japan). Its campus was originally located in Sumiyoshi-ku, Osaka. In 1976, the university was moved to Sakai. The campus (abolished in March 2007) was next to Daisen-kofun (supposed to be the tomb of Emperor Nintoku).

OWU at first had one faculty: Faculty of Liberal Arts and Education, which included:

In 1999 Faculty of Liberal Arts and Education was reorganized into two faculties:

OPU has one of the largest campus areas in Japan, and it has a very nice relaxing atmosphere especially in the parks where children often come to play during holidays. There are four cafeterias which are popular among the students and also the professors.

OPU is specially superior in the engineering science field. All information about classes and student's results are administered using an IT System and there are lots of computers that all students can use freely.

OPU has four school festivals namely "Yuko festival", "Tanabata festival", "Anju festival" and "Shirasagi festival." The Yuko festival is held in May, where many freshmen set up refreshment booths and make friends in this festival, since "Yuko" means "friendship" in English. The Shirasagi festival is held in November and is a big festival that has been a tradition for more than 60 years. Every year, in this festival there are many booths and four stages for some events, where famous singers and artists are invited to perform. Among all the refreshment booths, the one that sells "Churros" is the most popular. Each festival, many people come and check out the booths and enjoy the events and OPU.

OPU has two large famous gates: Nakamozu gate and Shirasagi gate. Those gates are used by most people who go to OPU. OPU has facilities such as library, U Function hall and grassy areas where people can have picnics, so in weekdays most students enter the university through those gates in order to take lessons, and in the weekends, people who live near OPU enter through those gates in order to play or just walk around in the parks inside of the university.