Not to be confused with Hyogo University.

At its birth, UH opened a new independent campus (with its headquarters office) in the Harborland (Chuo-ku, Kobe); the other campuses were those of the predecessors:

Below are the histories of the predecessors: 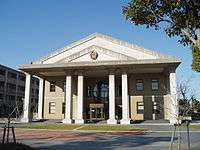 The administration office in Kobe Gakuentoshi Campus, built around 1990

Not to be confused with the predecessor of Kobe University.

KUC was founded in 1929 as Hyogo Prefectural Kobe Higher Commercial School (兵庫県立神戸高等商業学校), a men's college (for age 17-20 or above).[3] Because in 1929 the older Kobe Higher Commercial School (a national college) was reorganized into older Kobe University of Commerce (for age 19-22 or above; see Kobe University), the prefecture lost a college for boys at age 17-20. So the prefecture founded its own commercial college. The campus was located on a hill called Seiryōdai (星陵台, [lit. Starry Hill]) in Tarumi. In 1944 the college was renamed Kobe College of Economics (神戸経済専門学校). Among the notable alumni are Isao Nakauchi (the founder of Daiei) and Nobuo Okishio (who finally graduated Kobe University).

In 1948 the college was reorganized into Kobe University of Commerce, the first public university under Japan's new educational system. In 1990 KUC moved to present-day Kobe Gakuentoshi Campus.

The old auditorium (in Himeji Shinzaike Campus), built in 1926

HIT was founded in 1944 as Hyogo Prefectural Technical School (兵庫県立高等工業学校), a men's college with three departments: Mechanics, Electronics and Applied Chemistry. The first campus was located on a hill of Goinoike, Nagata-ku, Kobe. In 1945 the campus was heavily bombed; in 1946, after World War II, the college was removed to Idei, Himeji.

CNASH was established in 1993; it was the first public 4-year college of nursing in Japan. The Graduate School was implemented by 1999 (both Master's and Doctoral programs).