This article is about a private university in Japan. For other uses, see Osaka University of Commerce (disambiguation). 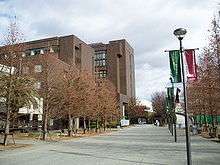 The origin was founded in 1928 as Osaka Joto School of Commerce (大阪城東商業学校) by Noboru Tanioka (谷岡登, 1894-1974). This was a five-year school for boys (for ages 12–17 or above). In 1934 the school was hit by Typhoon Muroto, and the school building was rebuilt with reinforced concrete in 1935 (Tanioka Memorial Hall today). In 1944, during World War II, the school was forcedly reorganized into Fusé Technical School (布施工業学校), which was restored to a commercial school after the war.[1]

In September 1947, the school was merged with Katano Women's College (交野女子専門学校) to constitute Joto Vocational College (城東専門学校, a three-year college for ages 17–20 or above). The former commercial school was reorganized into a high school in 1948 under Japan's new educational systems (Osaka University of Commerce High School today). 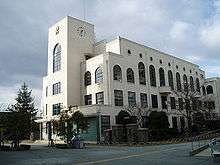