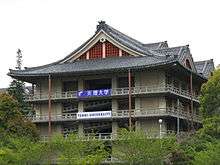 Tenri University (天理大学, Tenri Daigaku) is a Japanese private university in Tenri, Nara Prefecture, an independent part of the secular mission of the new religious movement Tenrikyo. It was established in February 1925 as the coeducational Tenri Foreign Language School (天理外国語専門学校, Tenri Gaikokugo Senmon Gakkō), enrolling 104 students, and was reorganised as a university in April 1949.[1]

As Tenrikyo expanded in the early 20th century, its leaders decided that all adherents had the right to a formal secular education, and the Tenri Foreign Language School was founded at the same time as a public preschool, kindergarten, and elementary school.[2] By the 1970s, it had developed a strong reputation in Japan for foreign language study and judo.[2]

Only one third of Tenri University students are actually Tenrikyo adherents. Its foreign exchange students also come from a variety of religious backgrounds.

Tenri University is part of the oyasato-yakata complex, a square almost one kilometer in diameter that also houses a seminary, public schools, Tenrikyo lectures, and the Tenri Hospital.

In 2002, the school attracted national notice when it was discovered that a professor there had posted student attendance information and grades on his publicly accessible personal website; the university disciplined the professor for violating the students' privacy.[3]