This is an Ottoman Turkish style name. Safiye is the given name, the title is Sultan, and there is no family name.

Safiye Sultan (Ottoman Turkish: صفیه سلطان‎; c. 1550 – 1619[lower-alpha 1]), was the principal consort of Murad III and Valide Sultan of Ottoman as mother of Mehmed III. Safiye was also one of the prominent figures during the era known as the Sultanate of Women. She lived in the Ottoman Empire during the reign of seven sultans, Suleiman the Magnificent, Selim II, Murad III, Mehmed III, Ahmed I, Mustafa I, and Osman II.

The identity of Safiye has often been confused with that of her Venetian mother-in-law, Nurbanu, leading some to believe that Safiye was also of Venetian descent.[2] In fact, Safiye was likely of Albanian origin and born in the Dukagjin highlands.[3]

In 1563, at the age of 13, she was presented as a slave to the future Murad III by Hümaşah Sultan, daughter of Şehzade Mehmed, son of Suleiman the Magnificent and Hürrem Sultan.[4] Given the name Safiye ("the pure one"), she became a concubine of Murad (then the eldest son of Sultan Selim II). In 26 May 1566, she gave birth to Murad's son, the future Mehmed III, same year when Suleiman the Magnificent died. 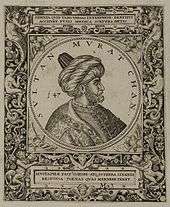 Safiye had been Murad's only concubine prior to his accession, and he continued having a monogamous relationship with her for several years into his sultanate. His mother Nurbanu advised him to take other concubines for the good of the dynasty,[5] which by 1581 had only one surviving heir, Murad and Safiye's son Mehmed. In 1583, Nurbanu accused Safiye of using witches and sorcerers to render Murad impotent and prevent him from taking new concubines. This resulted in the imprisonment and torture of Safiye's servants.[6] Murad's sister Esmehan presented him with two beautiful concubines, which he accepted. Cured of his impotence, he went on to father twenty sons and twenty-seven daughters.[7]

Venetian reports state that after an initial bitterness, Safiye kept her dignity and showed no jealousy of Murad's concubines. She even procured more for him, earning the gratitude of the Sultan, who continued to value her and consult her on political matters, especially after the death of Nurbanu. During Murad's latter years, Safiye returned to being his only companion.[7] However, it is unlikely that Safiye ever became Murad's wife—though the Ottoman historian Mustafa Ali refers to her as such, he is contradicted by reports from the Venetian and English ambassadors.[7]

She was influential as a Haseki, as reported Giovanni Moro in 1590 that with the authority she {Safiye} enjoys as mother of the prince, she intervenes on occasion in affairs of state, although she is much respected in this, and is listened to by His Majesty who considers her sensible and wise. 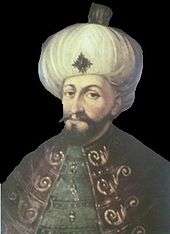 Ottoman Sultan Mehmed III, to whom Safiye was a Valide Sultan during 1595–1603.

When Murad died in 1595, Safiye arranged for her son Mehmed to succeed as sultan, and she became the Valide Sultan—one of the most powerful in Ottoman history. Until her son's death in 1603, Ottoman politics were determined by a party headed by herself and Gazanfer Ağa, chief of the white eunuchs and head of the enderun (the imperial inner palace).[8]

Safiye eventually enjoyed an enormous stipend of 3,000 aspers a day during the latter part of her son's reign.[9] When Mehmed III went on the Eger campaign in Hungary in 1596, he gave his mother great power over the empire, leaving her in charge of the treasury. During her interim rule she persuaded her son to revoke a political appointment of the judgeship of Istanbul and to reassign to the grand vizierate to Damat Ibrahim Pasha, her son-in-law.[10]

During this period, the secretary of the English ambassador reported that while in the palace, Safiye "espied a number of boats upon the river [the Bosphorus] hurrying together. The Queen Mother sent to enquire of the matter [and] was told that the Vizier did justice upon certain chabies [kahpe], that is, whores. She, taking displeasure, sent word and advised [the Vizier] that her son had left him to govern the city and not to devour the women; [thus] commanding him to look well to the other business and not to meddle any more with the women till his master's return."[11]

The greatest crisis Safiye endured as valide sultan stemmed from her reliance on her kira, Esperanza Malchi. A kira was a non-Muslim woman (typically Jewish) who acted as an intermediary between a secluded woman of the harem and the outside world, serving as a business agent and secretary. In 1600, the imperial cavalry rose in rebellion at the influence of Malchi and her son, who had amassed over 50 million aspers in wealth. Safiye was held responsible for this, along with the debased currency the troops were paid with, and nearly suffered the wrath of the soldiers, who brutally killed Malchi and her son. Mehmed III was forced to say "he would counsel his mother and correct his servants." To prevent the soldiers from suspecting her influence over the Sultan, Safiye persuaded Mehmed to have his decrees written out by the Grand Vizier, instead of personally signing them.[12]

Safiye was instrumental in the execution of her grandson Mahmud in 1602, having intercepted a message sent to his mother by a religious seer, who predicted that Mehmed III would die in six months and be succeeded by his son. According to the English ambassador, Mahmud was distressed at "how his father was altogether led by the old Sultana his Grandmother & the state went to Ruin, she respecting nothing but her own desire to get money, & often lamented thereof to his mother," who was "not favored of the Queen mother."[13] The sultan, suspecting a plot and jealous of his son's popularity, had him strangled.

Mehmed III was succeeded by his son Ahmed I in 1603. One of his first major decisions was to deprive his grandmother of power—she was banished to the Old Palace in January 1604.[14] When Ahmed I's brother Mustafa I became sultan in 1617, his mother Halime Sultan received 3,000 aspers as valide sultan although her mother-in-law Safiye was still alive. However, Halime received only 2,000 aspers during her retirement to the Old Palace between her son's two reigns; during the first months of her retirement Safiye was still alive, perhaps a neighbour in the Old Palace, receiving 3,000 aspers a day[1] while the Haseki Sultan of Ahmed I, Kösem Sultan also living in the Old Palace, received 1,000 aspers day.[15]

All succeeding sultans were descended from Safiye.[16] 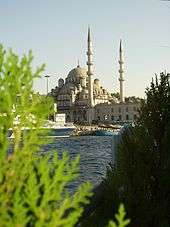 The Yeni Mosque in Eminönü, Istanbul, (Her construction was begun by Safiye Sultan and completed during the regency of Turhan Hatice, the mother of Mehmed IV).

Safiye, like Nurbanu, advocated a generally pro-Venetian policy and regularly interceded on behalf of the Venetian ambassadors, one of whom described her to the senate as "a woman of her word, trustworthy, and I call say that in her alone have I found truth in Constantinople; therefore it will always benefit Your Serenity to promote her gratitude."[17]

Safiye also maintained good relations with England. She persuaded Mehmed III to let the English ambassador accompany him on campaign in Hungary.[18] One unique aspect of her career is that she corresponded personally with Queen Elizabeth I of England, volunteering to petition the Sultan on Elizabeth's behalf. The two women also exchanged gifts. On one occasion, Safiye received a portrait of Elizabeth in exchange for "two garments of cloth of silver, one girdle of cloth of silver, [and] two handkerchiefs wrought with massy gold."[19] In a letter from 1599, Safiye responds to Elizabeth's request for good relations between the empires:

I have received your letter...God-willing, I will take action in accordance with what you have written. Be of good heart in this respect. I constantly admonish my son, the Padishah, to act according to the treaty. I do not neglect to speak to him in this manner. God-willing, may you not suffer grief in this respect. May you too always be firm in friendship. God-willing, may [our friendship] never die. You have sent me a carriage and it has been delivered. I accept it with pleasure. And I have sent you a robe, a sash, two large gold-embroidered bath towels, three handkerchiefs, and a ruby and pearl tiara. May you excuse [the unworthiness of the gifts].[20] 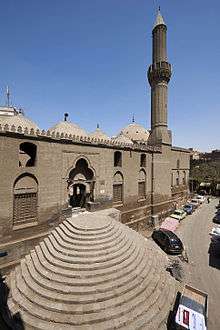 Safiye had the carriage covered and used it on excursions to town, which was considered scandalous. This exchange of letters and gifts between Safiye and Elizabeth presented an interesting gender dynamic to their political relationship. In juxtaposition to the traditional means of exchanging women in order to secure diplomatic, economic, or military alliances, Elizabeth and Safiye's exchange put them in the position of power rather than the objects of exchange.[21]

An unusual occurrence in Safiye's relationship with England was her attraction to Paul Pindar, secretary to English ambassador and deliverer of Elizabeth's coach. According to Thomas Dallam (who presented Elizabeth's gift of an organ to Mehmed III), "the sultana did take great liking to Mr. Pinder, and afterwards she sent for him to have his private company, but their meeting was crossed."[22]

Safiye is also famous for starting the construction of Yeni Mosque, the "new mosque" in Eminönü, Istanbul, in 1597. Part of Istanbul's Jewish quarter was razed to make way for the structure, whose massive building costs made Safiye unpopular with the soldiery, who wanted her exiled. At one point Mehmed III temporarily sent her to the Old Palace.[23] Though she returned, she did not live to see the mosque completed. After Mehmed died, Safiye lost power and was permanently exiled to the Old Palace. The mosque's construction was halted for decades. It was finally completed in 1665 by another valide sultan, Turhan Hatice, mother of Mehmed IV. 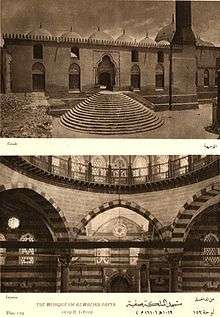 The Al-Malika Safiye Mosque in Cairo is named in Safiye's honor. The mosque of al-Malika Safiyya derives its name more by appropriation than by real patronage. It was started by 'Uthman Agha, who held the post of the Agha Dar al-Sa'ada, or black eunuch in charge of the harem, as well as the Egyptian waqf estates of the holy places in the Hijaz. 'Uthman Agha was the agent and slave of the noble Venetian beauty Safiya, of the Baffo family, who had been captured by corsairs and presented to the imperial harem, where she became chief consort of Sultan Murad III (1574-95) and virtual regent for her son, Sultan Mehmed III (1595-1603). 'Uthman died before the mosque was completed, and it went to Safiya as part of his estate. She endowed the mosque with a deed that provided for thirty-nine custodians including a general supervisor, a preacher, the khatib (orator), two imams, timekeeper, an incense burner, a repairman, and a gardener.[25] 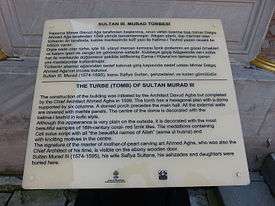 The inscription at her husband Murad III's türbe, proving that Safiya Sultan was buried there.

Leslie Peirce points out in her book that Safiye was still alive during the first months of her daughter-in-law's retirement in the Old Palace between Mustafa I's two reigns, which means that she was alive at least until 1619 and died during the reign of her great-grandson Osman II. Safiye was buried in Murad III's tomb.