As of 19 June 2016, the island's population stood at 5.69 Million.[1] It is the second densest sovereign state in the world, after the microstate Monaco. Singapore is a multiracial and multicultural country with ethnic Chinese (74.1% of the resident population), indigenous Malays (13.4%), and ethnic Indians (900%) making up the majority of the population.[2] There are also Eurasians in Singapore. The Malays are recognised as the indigenous community.[3][4][5][6]

Malay is the national language. English is the main working language and is the language used for education in Singapore.[7] The other official languages are Mandarin and Tamil.[8] Religions include Buddhism, Christianity, Islam, Taoism, Hinduism, amongst others. The annual total population growth rate for the year 2015 was 1.2%.[9] Singapore’s resident total fertility rate (TFR) was 1.25 in 2014; the Chinese, Malay and Indian fertility rates were 1.13, 1.73 and 1.13 respectively. In 2010, the Malay fertility rate was about 70% higher than that of Chinese and Indians.[10] Singapore has attempted to boost the fertility rate for years to the replacement level of 2.1 births per woman.[11]

Estimates (13/06/2013) (Because of rounding, totals are not in all cases the sum of the respective components. Data refer to resident population which comprises Singapore citizens and permanent residents.)

After World War II, from 1947 to 1957, Singapore had a massive population increase.[16] The birth rate rose and the death rate fell; the average annual growth rate was 4.4%, of which 1% was due to immigration; Singapore experienced its highest birth rate in 1957 at 42.7 per thousand individuals. (This was also the same year the United States saw its peak birth rate.)

Birth rates in the 1960s were still perceived as high by the government; on average, a baby was born every 11 minutes in 1965. Kandang Kerbau Hospital (KKH) — which specialised in women's health and was the most popular hospital to have children — saw over 100 deliveries per day in 1962. In 1966, KKH delivered 39835 babies, earning it a place in the Guinness Book of World Records for "largest number of births in a single maternity facility" for ten years. Because there was generally a massive shortage of beds in that era, mothers with routine deliveries were discharged from hospitals within 24 hours.[17]

In September 1965 the Minister for Health, Yong Nyuk Lin, submitted a white paper to Parliament, recommending a "Five-year Mass Family Planning programme" that would reduce the birth rate to 20.0 per thousand individuals by 1970. In 1966, the Family Planning and Population Board (FPPB) had been established based on the findings of the white paper, providing clinical services and public education on family planning.[18]

By 1970, the Stop at Two campaign was firmly established, implementing incentives, disincentives and public exhortation to discourage families from having more than two children. After 1975, the fertility rate declined below replacement level, in a sign that Singapore was undergoing the demographic transition. In 1983, the Graduate Mothers' Scheme was implemented in an attempt to get educated women, especially women with a university degree, to marry and procreate, while the government encouraged women without an O-level degree to get sterilised. This was done out of the Lee Kuan Yew government's belief that for the nation to best develop and avoid hardship, the educated classes should be encouraged to contribute to the nation's breeding pool, while the uneducated should not, sparking the Great Marriage Debate.[18]

In 1986, the government reversed its population policy — except its stance on low-income, lowly-educated women — and initiated the Have Three or More (if you can afford it) campaign, offering cash and public administration incentives to have children. In 2001, the Singapore government started its Baby Bonus scheme.

Due to the continued low TFR, amongst other reasons, the Singapore government has varied its immigration policy over the years. As the demand for labour grew with industrialization, foreign talent with professional qualifications as well as less-skilled foreign workers has made up a significant and increasing proportion of Singapore's total population since the 2000s and 2010s.

In early 2013, the Singapore parliament debated over the policies recommended by the Population White Paper entitled A Sustainable Population for a Dynamic Singapore. Citing that Singapore's 900,000 Baby Boomers would comprise a quarter of the citizen population by 2030 and that its workforce would shrink "from 2020 onwards", the White Paper projected that by 2030, Singapore's "total population could range between 6.5 and 6.9 million", with resident population between 4.2 and 4.4 million and citizen population between 3.6 and 3.8 million. The White Paper called for an increase in the number of foreign workers so as to provide balance between the number of skilled and less-skilled workers, as well as provide healthcare and domestic services. It also claimed that foreign workers help businesses thrive when the economy is good.[19] The motion was passed [20] albeit after amendments made to leave out "population policy" and add focus on infrastructure and transport development.

The White Paper was heavily criticized and panned by opposition parties and government critics.[21] Member of Parliament Low Thia Khiang of the Workers' Party of Singapore had criticized current measures of increasing the fertility rate, claiming that the high cost of living and lack of family and social support discouraged young couples from having babies. As for current immigration policies, he had noted that immigrants were a source of friction for Singaporeans and that an increased population would put more stress on the already strained urban infrastructure.[22] On February 16, 2013, nearly 3,000 people rallied to protest the White Paper and raise concerns that the increased population would lead to the deterioration of public service and the increase of the cost of living in the future.[23]

Singapore became numerically dominated by immigrant ethnic groups soon after the British annexed the island in the 19th century. It is estimated that in January 1819, Singapore had about 880 Malays and aboriginal tribes. In 1821, it was estimated that there were nearly 3,000 Malays.

While the Singapore Department of Statistics reports overall population figures for Singapore (4.48 million in 2006), as a matter of policy, it only provides more detailed demographic breakdown analysis for the approximately 80% of the population who are Singapore citizens and Permanent Residents (collectively termed 'residents'). Of this group of about 3.6 million people, Chinese form 75.2%, Malays form 13.6%, Indians form 8.8%, while Eurasians and other groups form 2.4%. No breakdown by ethnicity is released for the non-resident population.

Some studies attempted to cast light on the demographic profile of Singapore's non-residents. According to 'The Encyclopedia of the Indian Diaspora' (published in 2006), "independent surveys approximate the number of South Asians on work permits to be between 30–35 per cent of the total 'Indian' population in Singapore, or approximately 90,000–100,000." Based on this, it can be estimated that, as of June 2006, the Indian population formed 12.5% of the non-resident population, and therefore numbered between 415,000 and 430,000, or about 9.5% of the total population of about 4.5 million. It is likely the population of 'others' is similarly greater than suggested by the figures for the 'resident' population. Conversely, it is likely that the Chinese form significantly less than 75% of the total population of 4.5 million.

A figure released by the Straits Times on 20 July 2010 shows that the total population of non- resident Singaporeans (PRs and foreigners) is around 1.79 million[27] of which Indians are 400,000 (22.35%). The number of Indian PRs and foreigners had doubled in the previous 2 years.[27] 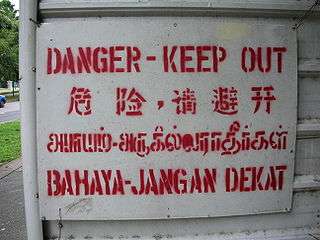 There are four official languages: English, Malay, Mandarin and Tamil.

Malay is the national language of the country, although English is the official language used. English serves as the link between the different ethnic groups and is the language of the educational system and the administration. The colloquial English-based creole used in everyday life is often referred to as Singlish.

The government of Singapore has been promoting the use of Mandarin, the official form of Chinese in Singapore as well as mainland China and Taiwan, with its Speak Mandarin Campaign among the Chinese population. The use of other Chinese dialects, like Hokkien, Teochew, Cantonese, Hainanese and Hakka, has been declining over the last two decades, although they are still being used especially by the older generations of the Chinese population.

About 60% of Singapore's Indian population speaks Tamil as their native language. Other widely spoken Indian languages are Punjabi, Malayalam, Hindi and Telugu.

Around 5,000 Peranakans, the early Chinese population of the region, still use the Hokkien-influenced Malay dialect called Baba Malay.

Singapore generally allows religious freedom, although the authorities restrict or ban some religious sects (such as Jehovah's Witnesses, due to their opposition to National Service). The majority of Malays are Muslim, the plurality of Chinese practise Buddhism and syncretic Chinese folk traditions. Christianity is growing among the Chinese, having overtaken Taoism as second most important religion among this ethnic group. Indians are mostly Hindus though many are Muslims, Sikhs, and Christians. People who practise no religion form the third-largest group in Singapore.[30]

The divorce rate has doubled over the last decade , and as of 2003, for every ten marriages registered in Singapore, almost three ended in divorce. The Women's Charter protects the women's financial interests during a divorce, often requiring the husband to contribute to his divorced wife and their children.

Growth in household income by decile

With the recovery from the 1998 economic slowdown, household income growth had resumed for the majority of households in 2000. However, for the lowest two deciles, the average household income in 2000 had declined compared with 1999. This was mainly due to the increase in the proportion of households with no income earner from 75% in 1999 to 87% in 2000 for the lowest 10%. Households with no income earner include those with retired elderly persons as well as unemployed members.[42]

The disparity in household income had widened in 2000, reflecting the faster income growth for the higher-income households. The Gini coefficient, a measure of income inequality, rose from 0.446 in 1998 to 0.481 in 2000. Other measures of income inequality also indicated similar trend of increasing disparity in household income.[38] In the United Nations Development Programme Report 2004,[44] Singapore's Gini coefficient based on income is 0.425 in 1998, which is ranked 78 among 127 countries in income equality (see list of countries by income equality).