The Ethiopian Somali Regional State (Somali: Dawlada Deegaanka Soomaalida Itoobiya) is the easternmost of the nine ethnic divisions (kililoch) of Ethiopia. It is often called Soomaali Galbeed ("Western Somalia") on account of its geographical position within the Greater Somalia matrix.[1] The state borders the Ethiopian regions of Oromia, Afar and Dire Dawa (Diridhawa) to the west, as well as Djibouti to the north, Somalia to the north, east and south, and Kenya to the south-west.

Jijiga has been the capital of the Somali Regional State since 1994. The capital had been Kebri Dahar (Qabridahare) until 1992, when it was moved to Gode. On April 1994, the capital was moved to Jijiga on account of political considerations.[2] Other major towns and cities include: Degehabur, Kebri Beyah, Kebri Dahar, Godey, Shilavo, Geladin, Feer-feer, Kelafo, and Werder. 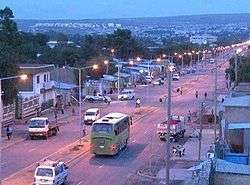 The Somali Region covers much of the traditional territory of Ogaden and it formed a large part of the pre-1995 province of Hararghe. The population is predominantly Somali, and there is internal pressure to remove Ethiopian rule. There have been attempts to incorporate the area into a Greater Somalia. In the 1970s, Somalia invaded Ethiopia in support of a local guerrilla movement, igniting the Ogaden War, which Somalia lost due to timely military intervention from the Soviet Union and its ally Cuba. Despite this defeat, local groups still seek either to become part of Somalia or independent, frequently resorting to violence; one such action, the 2007 Abole oil field raid, has led to a series of military reprisals against civilians accused of supporting the Ogaden National Liberation Front.

Until its first-ever district elections in February 2004, Zonal and woreda administrators, and village chairmen were appointed by the Regional government. Senior politicians at the Regional level nominated their clients to the local government positions. In the 2004 local elections, each woreda elected a council including a spokesman, vice-spokesman, administrator, and vice-administrator. These councils have the responsibility of managing budgets and development activities within their respective districts.[3]

The President and the Vice-president giving a speech at a ceremony. 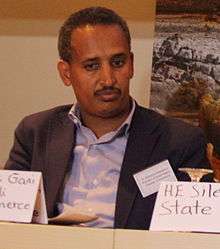 There are 8 refugee camps and 1 transit center, housing 212,967 refugees from Somalia, located in Somali Region.[5]

According to the CSA, as of 2004, 38.98% of the total population had access to safe drinking water, of whom 21.32% were rural inhabitants and 77.21% were urban.[8] Values for other reported common indicators of the standard of living for Somali as of 2005 include the following: 71.8% of the inhabitants fall into the lowest wealth quintile; adult literacy for men is 22% and for women 9.8%; and the Regional infant mortality rate is 57 infant deaths per 1,000 live births, which is less than the nationwide average of 77; at least half of these deaths occurred in the infants’ first month of life.[9] 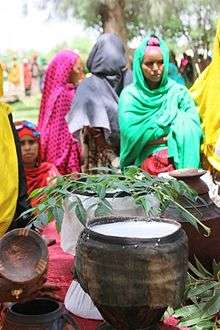 As part of the Camel Milk Value-Chain Development project ceremony, women from Fafan village in the Somali Regional State offer fresh camel milk and other local delicacies in traditional containers. 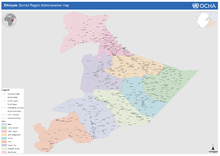 The Somali Region is subdivided into administrative zones:[11]