Suzuka is located in northeastern Mie Prefecture, in northern Kii Peninsula, bordered by Ise Bay to the east. Parts of the city are within the borders of the Ise-no-Umi Prefectural Natural Park and the Suzuka Quasi-National Park.

Suzuka, as a place name, is mentioned in the Nara period chronicle Nihon Shoki. The ancient Tōkaidō passed through Suzuka, and the Nara-period provincial capital was located within its borders. During the Sengoku period, the area was controlled by Oda Nobutaka, the third son of Oda Nobunaga, who ruled from Kanbe Castle. During the Edo period, much of the area was under the control of the 15,000 koku Kambe Domain, ruled by the Honda clan from 1732 until the Meiji restoration in 1871. During this period, two post stations were located within the modern city limits: Ishiyakushi-juku and Shōno-juku, which prospered due to pilgrimage traffic to the Ise Grand Shrines.

After the start of the Meiji period, the area was organized as part of Suzuka District in 1889. The modern city of Suzuka was founded on December 1, 1942.

Suzuka also boasts a significant industrial market, having major factories for both Sharp and Honda within its bounds. These companies outsource part of their labor to South American nationals in order to secure a contract-based workforce. Although the Japanese government is encouraging mandatory English-language education across the nation within Suzuka many courses offered, not only by private cram schools (juku) but also by publicly funded institutions, supporting Portuguese and Spanish. In a controversial move, the city's governing body, from April 2004, requires all garbage information and local signage to be displayed in both Japanese and Portuguese but not English. 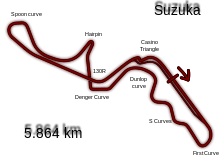 Suzuka Circuit was the home of the Japanese Grand Prix from 1987 to 2006, and again from 2009. It was the only figure-of-eight circuit in the championship, and is very popular with the drivers. Located next to the circuit is the Honda Safety Riding/Driving School, where thousands of car and motorcycle drivers have been trained, including many police officers and instructors throughout the world.