The Hans India is an English-language daily newspaper being published from Hyderabad, Telangana. It has presence in the Indian States of Telangana and Andhra Pradesh. 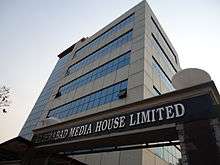 The newspaper was founded in 2011 and belongs to Hyderabad Media House, which also owns Telugu-language news channel HMTV.

The news coverage is anchored by journalist G. Rajashekar, who has been in the field for many years and worked in some of the country's leading media firms. The columnists include some leading journalists such as Chukka Ramaiah, Gangadhar, K.S Chalam, Kuldeep Nayar, Madabhushi Sridhar, M.V Kamath, Madhusudhan, Gollapudi, Shaik Amer Arafath,[1][2][3][4] Nilotpal Basu and Pallavi Ghosh.