In geometry, an octagram is an eight-angled star polygon. 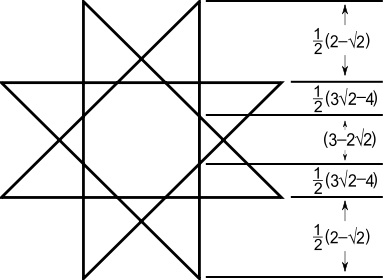 In general, an octagram is any self-intersecting octagon (8-sided polygon).

The regular octagram is labeled by the Schläfli symbol {8/3}, which means an 8-sided star, connected by every third point.

These variations have a lower dihedral, Dih4, symmetry:

The symbol Rub el Hizb is a Unicode glyph ۞  at U+06DE.

Deeper truncations of the square can produce isogonal (vertex-transitive) intermediate star polygon forms with equal spaced vertices and two edge lengths. A truncated square is an octagon, t{4}={8}. A quasitruncated square, inverted as {4/3}, is an octagram, t{4/3}={8/3}.[2]

The uniform star polyhedron stellated truncated hexahedron, t'{4,3}=t{4/3,3} has octagram faces constructed from the cube in this way.

There are two regular octagrammic star figures (compounds) of the form {8/k}, the first constructed as two squares {8/2}=2{4}, and second as four degenerate digons, {8/4}=4{2}. There are other isogonal and isotoxal compounds including rectangular and rhombic forms.

Other presentations of an octagonal star

An octagonal star can be seen as a concave hexadecagon, with internal intersecting geometry erased. It can also be dissected by radial lines.