"Tyr" and "Tiwaz" redirect here. For the Anatolian sun-god, see Istanu. For the rune, see Tiwaz rune. For the metal band, see Týr (band). For other uses, see Tyr (disambiguation).

Týr (/ˈtɪər/;[1] Old Norse: Týr [tyːr]) is a Germanic god associated with law and heroic glory in Norse mythology, portrayed as one-handed. Corresponding names in other Germanic languages are Gothic Teiws, Old English Tīw and Old High German Ziu and Cyo, all from Proto-Germanic *Tīwaz. The Latinised name is rendered as Tius or Tio and also formally as Mars Thincsus.[2]

In the late Icelandic Eddas, Týr is portrayed, alternately, as the son of Odin (Prose Edda) or of Hymir (Poetic Edda), while the origins of his name and his possible relationship to Tuisto (see Tacitus' Germania) suggest he was once considered the father of the gods and head of the pantheon, since his name is ultimately cognate to that of *Dyeus (cf. Dyaus), the reconstructed chief deity in Indo-European religion. It is assumed that Tîwaz was overtaken in popularity and in authority by both Odin and Thor at some point during the Migration Age, as Odin shares his role as God of war.

Týr is a god of war and will take mead, meat and blood for sacrifice. If a warrior carved the rune Tîwaz on his weapon he would be dedicating it to Týr and strengthen the outcome of a battle to be in his favor. Tiw was equated with Mars in the interpretatio germanica. Tuesday is in fact "Tīw's Day" (also in Alemannic Zischtig from zîes tag), translating dies Martis.

The earliest attestation for Týr's continental counterpart occurs in Gothic tyz "the t-rune" (𐍄) in the 9th-century Codex Vindobonensis 795.[4] The name is later attested in Old High German as Cyo in the A Wessobrunn prayer ms. of 814. The Negau helmet inscription (2nd century b.c.) may actually record the earliest form, teiva, but this interpretation is tentative.

Týr in origin was a generic noun meaning "god", e.g. Hangatyr, literally, the "god of the hanged", as one of Odin's names, which was probably inherited from Týr in his role as god of justice. The name continues on as Norwegian Tyr, Swedish Tyr, Danish Tyr, while it remains Týr in Modern Icelandic and Faroese.

A gloss to the Wessobrunn prayer names the Alamanni Cyowari (worshipers of Cyo) and their capital Augsburg Ciesburc.[5]

The Excerptum ex Gallica Historia of Ursberg (ca. 1135) records a dea Ciza as the patron goddess of Augsburg. According to this account, Cisaria was founded by Swabian tribes as a defence against Roman incursions. This Zisa would be the female consort of Ziu, as Dione was of Zeus.

The name of Mars Thingsus (Thincsus) is found in an inscription on a 3rd-century altar from the Roman fort and settlement of Vercovicium at Housesteads in Northumberland, thought to have been erected by Frisian mercenaries stationed at Hadrian's Wall. It is interpreted as "Mars of the Thing".[6] Here is also worth noting what Tacitus stated in his work Germania about capital punishment amongst the Germanic folk; that none could be flogged, imprisoned or executed, not even on order of the warlord, without the consent of the priest; who was himself required to render his judgement in accordance with the will of the god they believe inspires them to the field of battle.[7]

Tacitus also named the German "Mars" as the primary deity, along with the German "Mercury" (believed to be Odin), Hercules (believed to be Thor) and "Isis". In the text however, Hercules is the one to be mentioned the most often. Depending on translation, "Mercury" is stated to be the chiefly worshipped god but other translation does not provide any sort of hierarchy among the gods. Tacitus states that "Mars" and "Hercules" receive animal sacrifices while "Mercury" receives human sacrifices.[7][8]

In the Old English Rune Poem, the rune that is otherwise named for Tiw in the other rune poems (Abecedarium Nordmanicum, Old Norwegian Rune Rhyme, Old Icelandic Rune Poem), is called tir, meaning "glory". This rune was inscribed on more Anglo-Saxon cremation urns than any other symbol.

There is sketchy evidence of a consort, in German named Zisa: Tacitus mentions one Germanic tribe who worshipped "Isis", and Jacob Grimm pointed to Cisa/Zisa, the patroness of Augsburg, in this connection. The name Zisa could be derived from Ziu etymologically. 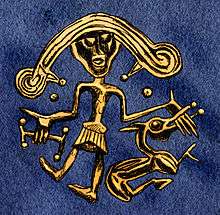 Drawing of Týr and Fenrir from the Migration Period golden bracteate from Trollhättan, Sweden.

An early depiction of Týr is found on the IK 190 bracteate found near Trollhättan, Sweden. The figure is shown with long hair, holding a sceptre in one hand, and with a wolf biting his other hand.[9] 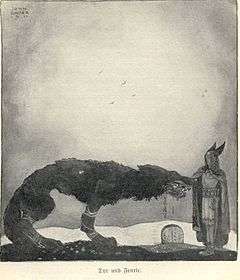 Týr sacrifices his arm to Fenrir in a 1911 illustration by John Bauer.

According to the Poetic Edda and Prose Edda, at one stage the gods decided to shackle the Fenris wolf (Fenrir), but the beast broke every chain they put upon him. Eventually they had the dwarves make them a magical ribbon called Gleipnir. It appeared to be only a silken ribbon but was made of six wondrous ingredients: the sound of a cat's footfall, the beard of a woman, the roots of a mountain, bear's sinews (meaning nerves, sensibility), fish's breath and bird's spittle. The creation of Gleipnir is said to be the reason why none of the above exist.[10] Fenrir sensed the gods' deceit and refused to be bound with it unless one of them put his hand in the wolf's mouth.

Týr, known for his great wisdom and courage, agreed, and the other gods bound the wolf. After Fenrir had been bound by the gods, he struggled to try to break the rope. Fenrir could not break the ribbon and, enraged, bit Týr's right hand off. When the gods saw that Fenrir was bound they all rejoiced, except Týr. Fenrir would remain bound until the day of Ragnarök. As a result of this deed, Týr is called the "Leavings of the Wolf"; which is to be understood as a poetic kenning for glory. As a consequence, however, his name is also associated with perjury.[11] During the battle at Ragnarök, Fenrir swallows Odin whole.

According to the Prose version of Ragnarök, Týr is destined to kill and be killed by Garm, the guard dog of Hel. However, in the two poetic versions of Ragnarök, he goes unmentioned; unless one believes that he is the "Mighty One".

In Lokasenna, Týr is taunted with cuckoldry by Loki, maybe another hint that he had a consort or wife at one time.

In the Hymiskviða, Týr's father is named as the etin Hymir – the term "Hymir's kin" was used a kenning for etinkind – while his mother goes unnamed, but is otherwise described in terms that befit a goddess. This myth also pairs Týr with Thor, and draws a comparison between their strength via the lifting of Hymir's cauldron. Thor proves the stronger, but other than Thor's own son, Magni, Týr is the only deity whose strength is ever questioned in comparison to the Thunderer's.

Sigrdrífumál teaches runemagic and advises one to twice name Týr and carve "victory runes" on the sword hilt, presumably referring to the t rune:[12] 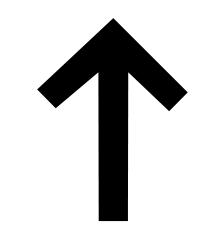 The t-rune ᛏ is named after Týr, and was identified with this god; the reconstructed Proto-Germanic name is *Tîwaz. The rune is sometimes also referred to as *Teiwaz, or spelling variants.

The rune was also compared with Mars as in the Icelandic rune poem:

In the sphere of organized warfare, Týr/Tiw had become relatively unimportant compared to Odin/Woden in both North and West Germanic by the close of the Migration Age. Traces of the god remain, however, in Tuesday (Old English tíwesdæg "Tiw's day"; Old Frisian tîesdei, Old High German zîestag, Alemannic and Swabian dialect in south west Germany (today) Zieschdig/Zeischdig, Old Norse týsdagr), named after Týr in both the North and the West Germanic languages (corresponding to Martis dies, dedicated to the Roman god of war and the father-god of Rome, Mars) and also in the names of some plants: Old Norse Týsfiola (after the Latin Viola Martis), Týrhialm (Aconitum, one of the most poisonous plants in Europe whose helmet-like shape might suggest a warlike connection) and Týviðr, "Tý's wood", Tiveden may also be named after Týr, or reflecting Týr as a generic word for "god" (i.e., the forest of the gods). In Norway the parish and municipality of Tysnes are named after the god.

German Dienstag and Dutch dinsdag (Tuesday) might be derived from Mars Thingsus, as mentioned above. 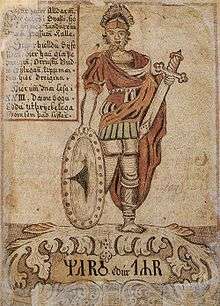 Týr, depicted here with both hands intact, before the encounter with Fenrir is identified with Mars in this illustration from an 18th-century Icelandic manuscript.

The altar dedicated to Mars Thingsus, erected in the 3rd century in Housesteads, Northumberland.

A number of Icelandic male names are derived from Týr. Apart from Týr itself: Angantýr, Bryntýr, Hjálmtýr, Hrafntýr, Sigtýr, Valtýr and Vigtýr. When Týr is used in this way, joined to another name, it takes on a more general meaning of "a god" instead of referring to the god Týr. For example, Hrafntýr "raven-god" and Valtýr "god of the slain" are Old Norse names of Odin. Tiwaz is also etymologically linked to the Anglo-Saxon surname Tyus, and connections have been made between Týr and Tyus. [16]