Some 20th-century select committees are called special committees, such as the Senate Special Committee on Aging. However, they do not differ in any substantive way from the others.[2]

Prior to the advent of permanent standing committees in the early 19th century, the House of Representatives relied almost exclusively on select committees to carry out much of its legislative work.[3] The committee system has grown and evolved over the years. During the earliest Congresses, select committees, created to perform a specific function and terminated when the task was completed, performed the overwhelming majority of the committee work. The first committee to be established by Congress was on April 2, 1789, during the First Congress. It was a select committee assigned to prepare and report standing rules and orders for House proceedings, and it lasted just five days, dissolving after submitting its report to the full House. Since that time, Congress has always relied on committees as a means to accomplish its work.[2]

Early select committees were very fluid, serving their established function and then going out of existence. This makes tracking committees difficult, since many committees were known by the date they were created or by a petition or other document that had been referred to them. In a number of instances, the official journal and other congressional publications did not consistently refer to an individual committee by the same title. Though such inconsistencies still appeared during the 20th century, they were less frequent.[2] 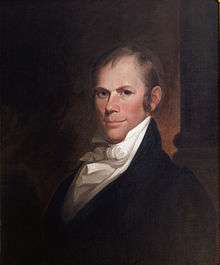 Henry Clay, Chairman of the Select Committee on the Various Propositions for the Admission of Missouri into the Union

While earlier select committees often narrowly tailored to specific issues, some select committees ultimately had a noticeable impact on federal legislation and American history. One was the select committee dealing with Missouri's admission as a new state.[3] The committee was established in 1821 and lasted just 7 days.[6] Chaired by Henry Clay,[3] the committee helped draft the Missouri Compromise, which attempted to resolve the question of whether slavery would be permitted in newly admitted states.

In the 21st century

The Select Committee on Energy Independence and Global Warming was established during the 110th Congress and renewed for the 111th Congress. The committee was advisory in nature, and lacked the legislative authority granted to standing committees.[8] The Committee was disbanded by the House in 2011 following Republican victories at the 2010 mid-terms[8]

The House of Representatives voted on May 8th, 2014 to create a special select committee to investigate what happened during the September 11, 2012 attack on the U.S. Embassy in Benghazi.[9]