Van Vihar National Park is a national park in central India. It is located in Bhopal, the capital city of Madhya Pradesh. Declared a national park in 1983, it covers an area of about 4.45 km2. Although it has the status of a national park, Van Vihar is developed and managed as a modern zoological park, following the guidelines of the Central Zoo Authority. The animals are kept in their near natural habitat. Most of the animals are either orphaned brought from various parts of the state or those, which are exchanged from other zoos. No animal is deliberately captured from the forest.[1] Van Vihar is unique because it allows easy access to the visitors through a road passing through the park, security of animals assured from poachers by building trenches and walls, chain-link fence and by providing natural habitat to the animals.

About two decades back, a number of illegal stone quarries were operational in the area and being in the serene and beautiful location on the bank of big lake, many commercial organizations were trying to take hold of this valuable piece of land. Realizing importance of both in-situ and ex-situ conservation of wild fauna, it was decided to provide this area a legal umbrella under the Wildlife (protection) Act, 1972. A committee of experts was constituted to decide the modalities for constitution of this area as a Protected Area. An area of 4.4521 km2 was declared to be a national park in 1983 as per the committee's recommendation. Out of the 4.4521 km2 of land, an area 3.8839 km2 was government revenue land and rest belonged to the villagers of Prempura, Dharampuri and Amkheda. A compensation of Rs. 23.52 lakhs was paid to villagers to acquire 0.5692 km2 of private holdings. After the constitution of National Park, such acquired area was enclosed in succession with stonewall and chain link fence. The first technical document [known as Management Plan], to manage the Van Vihar, was written in the year 2000, by Jagdish Chandra, IFS, & Ex-Director of Van Vihar. Efforts of staunch protection and habitat improvement measures resulted in its enrichment in a very short period of time.[2] 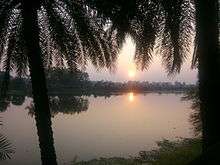 The degraded hillock of Shyamla Hill along with private village land was initiated in 1980 and finally notified as a national park in 1983. Funding from Central Zoo Authority started in 1993-94 and also granted Van Vihar as a medium sized zoo on the same year. With the dedicated efforts of the park management, this area has now been transformed into an oasis of greenery. The area today serves as the green lung for Bhopal City.[1]

Van Vihar categorises animals in two categories, captive and herbivores. All carnivorous animals are kept inside enclosed areas and herbivores are allowed to roam freely.

The animals such as tiger, lion, bear, hyena, crocodiles, gharial, snakes, python etc., are kept in captivity in a system of kraal and enclosures in lines of modern concept of zoo management as per the norms of Central Zoo Authority. All felids and hyenas are fed with buffalo meat, mutton and poultry. Bears are provided with milk, vegetables and fruits to make a balanced diet. 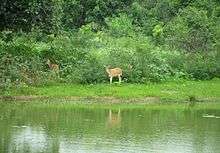 Free ranging animals, such as cheetal, sambhar, blackbuck, blue bull etc. are unique features of Van Vihar. There are no enclosures for them except the outer boundaries of Van Vihar. Normally the grass and other plant species growing in Van Vihar are sufficient for these herbivores. However, in summer when the grass is scarce, green fodder produced in the fodder farm and wheat husk procured from the market is provided as a supplement.

The wilderness of park offers an ideal habitat for a number of avian fauna. Till now about two hundred species of birds have been listed in different parts of Van Vihar.[3] Large number of birds frequent this park, especially during winter the migratory waterfowl alight in great numbers in the adjoining extensive wetland of big lake. In the 2010s, the park developed a vulture breeding centre which initially focused on restoring populations of Oriental white-backed vultures (Gyps bengalensis), and long billed vultures (Gyps indicus).[4] The park is also the abode of a variety of butterflies and insects.

The park is maintained by the Forest Department of Madhya Pradesh. The park administration is headed by a director of the rank of chief conservator of forests and assisted by one assistant director, 3 range officers, 3 deputy-rangers, 4 foresters and 24 game guards. In addition to these, persons are engaged on daily wage basis, to meet the day-to-day requirement of the animal care and management. Van Vihar administration is promoting cycling in the park; bicycles can be rented inside park gates at either end of the park. Van Vihar is closed on Fridays.