Namdapha National Park is the largest protected area in the Eastern Himalaya biodiversity hotspot and is located in Arunachal Pradesh in Northeast India. It is also the third largest national park in India in terms of area. It is located in the Eastern Himalayan sub-region and is recognized as one of the richest areas in biodiversity in India.[1] The park harbours the northernmost lowland evergreen rainforests in the world at 27°N latitude.[2] The area is also known for extensive Dipterocarp forests, comprising the northwestern parts of the ecoregion of Mizoram-Manipur-Kachin rain forests.[3]

The park is located in Changlang district of the Northeastern state of Arunachal Pradesh, near its border with Myanmar. It spans an area of 1985 km2 with 177 km2 in buffer zone and 1808 km2 in the core area. The park is located between the Dapha bum range of the Mishmi Hills and the Patkai range with a wide altitudinal range between 200 m asl and 4571 m asl.[1][3] The area falls under both the Palearctic and Indo Malayan biogeographic areas resulting in a diverse species assemblage. The habitat changes with increasing altitude from tropical moist forests to Montane forests, temperate forests and at the higher elevations, to Alpine meadows and perennial snow. The park has extensive bamboo forests and secondary forests in addition to the primary forests. 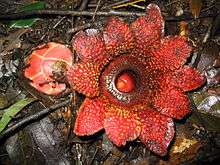 Sapria himalayana and Balanophora are root parasites related to Rafflesia recorded from the area.[4] The floristic diversity of Namdapha is as follows:

Values in parentheses are percentage of total number. 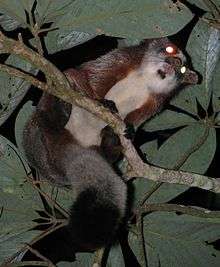 The red giant flying squirrel is often seen in this park

Among the earlier papers on the birds of Namdapha was published in 1990.[9] The park has about 425 bird species with many more to be recorded from work in the higher areas.[3] There are five species of hornbills recorded from the area. Several species of rare wren-babblers have been recorded in Namdapha. Other bird groups include laughing thrushes, parrotbills, fulvettas, shrike babblers and scimitar babblers. The snowythroated babbler is a rare species of babbler found only in the Patkai and Mishmi hills and nearby areas in Northern Myanmar, is found in Namdapha. Other rare, restricted range or globally endangered species include the rufous-necked hornbill, green cochoa, purple cochoa, beautiful nuthatch, Ward's trogon, ruddy kingfisher, blue-eared kingfisher, white-tailed fish eagle, Eurasian hobby, pied falconet, white-winged wood duck, Himalayan wood-owl, rufous-throated hill-partridge, and whitecheeked hill partridge. Several leaf warblers and migrants such as amur falcon and several thrushes can be seen here.[3] The first mid-winter waterfowl census in Namdapha was conducted in 1994 when species such as the white-bellied heron, a critically endangered bird was recorded for the first time.[10]

The region is very rich in Lepidoptera species. Both butterflies and moths are found in equal abundance here, along with a variety of other insects. As per the observations taken during the National Camp organised here in October 2014 by BNHS, a lot of rare species' of butterflies were seen. These include the koh-i-noor, naga treebrown, red caliph, cruiser, wizard, fluffy tit, East Himalayan purple emperor, etc.

There are a few settlements of Lisu tribal people within the park. Most of the Lisus are, however, located beyond the eastern border of the park towards the international border of India with Myanmar. There are also Chakma, Tangsa and Singpho settlements around the park..