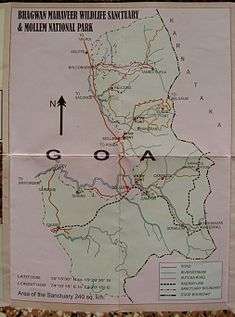 Bhagwan Mahaveer Sanctuary and Mollem National Park is a 240 square kilometres (93 sq mi) protected area located in the Western Ghats of South India, in Sanguem taluk, Goa along the eastern border with Karnataka. The area is situated near the town of Molem, 57 kilometres (35 mi) east of Panaji, the state capital of Goa. National Highway 4A divides it into two parts and the Mormugao - Londa railway line passes through the area. It is located between 15°15"30' to 15°29"30' N and 74°10"15' to 74°20"15' E.[1] It contains several important temples dating to the Kadamba Dynasty, and Dudhsagar Falls. The parkland is also home to a community of nomadic buffalo herders known as the Dhangar.

This area was first known as Mollem Game Sanctuary. It was declared a wildlife sanctuary in 1969 and renamed as Bhagwan Mahaveer Sanctuary. The core area of the sanctuary covering 107 square kilometres (41 sq mi) was notified as Mollem National Park in 1978.[2][3]

This sanctuary contains pristine vegetation classified as West Coast tropical evergreen forests, West Coast semi-evergreen forests and moist deciduous forests. The evergreen forests are mainly seen at higher altitudes and along the river banks. The predominant species are Terminalia, Lagerstroemia, Xylia and Dalbergia. The forest canopy is almost closed and the availability of grass is very limited. There are several perennial water sources in the sanctuary and the availability of water is not a limiting factor for wildlife.[4] 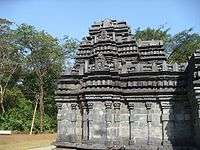 This small but exquisite 12th century Shiva temple of the lord Mahadeva is an active place or worship, located 13 km east of Bolcornem village, past the end of a single lane paved road in the northern region of the park. The temple consists of garbhagriha, antarala and a pillared Nandi mandapa built of basalt. The four pillars, embellished with intricate carvings of elephants and chains support a stone ceiling decorated with finely carved lotus flowers of the Ashtoken variety.[9][10]

Dudhsagar Falls (literally Sea of Milk) is a tiered waterfall located high up on the Mandovi River at the Karnataka border in the southwest part of the park, 10 km upstream from Collem village. At 310 m, it is Goa's tallest waterfall, India's fifth tallest, and is 227th in the world [11] A viaduct of the South Western Railways passes spectacularily through the waterfalls. This popular destination may be reached by hiking along the 10 km one lane dirt road or hiring a 4-wheel drive vehicle at Collem. Access is dangerous and restricted during the monsoon season of June to September.

This is an eerie canyon of water carved crevises downstream from Dudh Sagar Falls, created from solid rock by serpentine underwater currents. It is just off the main trail soon past the Collem entry point. 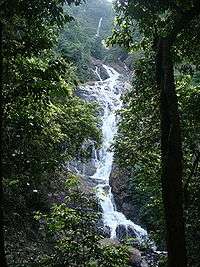 This waterfall, located about 2 km southwest of Tambdi Surla, at the Karnataka border, is equally spectacular and only slightly less tall than Dudsagar Falls, however it is rarely visited because of its difficult access by a steep, winding and irregular rocky path. A local guide is required.

This point provides a scenic view of the park, revealing an expanse of closed canopy treetops. It can be reached by park vehicles, hired at Mollem check-point, driving along a zig-zagging road carved from the mountain.

This protected area is threatened by extensive surface mining and transport of manganese and iron ores.[12] A serious threat is the deposit of toxic wastes. In 2006, nearly 13 truckloads of sponge iron by-products had been dumped in the Mollem Wildlife Sanctuary and at Anmod Ghat,[13] The settlement of private rights and concessions has still not been done away with. Some private lands are still within the sanctuary and need to be acquired in due course of time.[14]