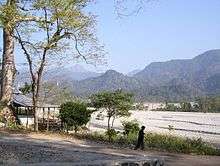 Buxa Tiger Reserve (BTR) lies in Alipurduar district of West Bengal. Its northern boundary runs along the international border with Bhutan. The Sinchula hill range lies all along the northern side of BTR and the eastern boundary touches that of the Assam State. National Highway No.31 C roughly runs along its southern boundary. It is the eastern most extension of extreme bio-diverse North-East India & represents highly endemic Indo-Malayan region. The fragile "Terai Eco-System" constitutes a part of this Reserve. The Phipsu Wildlife Sanctuary of Bhutan is contiguous to North of BTR. Manas National Park lies on east of BTR. BTR, thus, serves as international corridor for Asian elephant migration between India and Bhutan. To the south-west, the Chilapata Forests form an elephant corridor to the Jaldapara Wildlife Sanctuary. The reserve encompasses as many as eight forest types. The divisional headquarters is located at Alipurduar. The forest is divided into two divisions: East and West. The Himalayan griffon, beautiful Nutuch, four different varieties of hornbill and the red brested Himalayan partridge are important birds in this reserve. Among the wild animals, clouded leopard, tiger, wild dog, pangolin, Himalayan black bear are rare. Buxa Fort is an important landmark for this reserve. This fort was captured by the British-India in 1865 after the Dooars War from Bhutan. Later this fort was used as a detention camp for Indian freedom fighters during the Indian freedom movement. 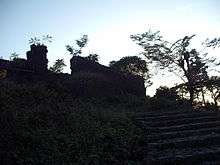 The historic Buxa Fort (2,600 feet or 790 metres above m.s.l.). People have sentimental attachment with the fort on accounts of its association with the struggle for freedom. A sacred temple, Mahakaleshwar Jyotirlinga lies in BTR. Around 10,000 devotees of Lord Shiva congregate here on "Shiva Chouturdoshi". 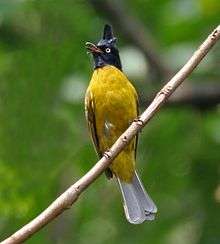 There are more than 284 species of birds,[1] 73 species of mammals, 76 species of snakes and 5 species of amphibians have been identified so far. In a recent survey (2006) it was found that Buxa Tiger Reserve has the highest number of fish species in the North Bengal region. Tigers, elephants, bears, civets, giant squirrel, gaur, chital, clouded leopard, wild buffalo, antelope and snakes including the regal python are found here.[2] 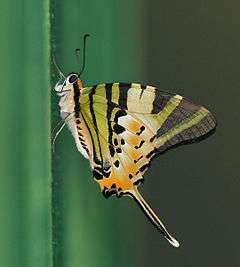 Fivebar swordtail in the reserve

About 230 species of birds and innumerable butterflies add colour to the forest. The Raidak and Jayanti rives which flow through the forest and Narathali Lake are home to migratory and endemic birds. There are greater pied hornbill, ibisbill, migratory goosander, red-stars, wagtails, the rare black necked crane, migratory common teal, black stork, large whistling teal, minivets, and ferruginous pochards. Two new species of frog were discovered in the park in 2006.[3]

Threats to the reserve

Buxa (2,600 ft) is a One hour fifteen minutes (3.9 km) trek through picturesque surroundings from Santhalbari, the starting point. The Historical Buxa Fort was coming under the British India after the 2nd Dooars War (1865) between the Bhutan and the British,the subsidiary alliance of Princely state Cooch Behar. This was used as a Detention Camp by the British, because of its remoteness during the Indian Freedom Movement. Many freedom fighters were imprisoned here. After independence, it served as a refugee camp for Tibetans and Bangladeshis. There are a number of trekking routes through the jungle.

An expert guide and entry permit are must for trekking in Buxa hills. One may visit the very beautiful village of Dukpas called Lapchakha (1.5 hours trek) from Buxa Fort. A beautiful Trekkers Hut named Dukpa's Hut (with attached bath) is located just opposite to the Buxa Fort ground and besides of Rupang Valley Trek route. Though there are eight Home Stays in total, but mostly are located at Lapchakha with minimum facilities. Only Rovers' Inn at Sadar bazar have maximum capacity of accommodations but far from Buxa Fort. Dukpas Hut is also called 'Birders Nest' by the Bird Watchers. Trekking in different short route with camping facilities arranged from the Dukpas Hut. It has a separate kitchen for Trekkers also. the Double storied wooden hut has 2 numbers of family rooms (3 sleeps)on upper floor and a Dormitory with attached bath on ground floor (06 sleeps) with Dining facility. Bird Watching, Trekking and Dark sky Photography tours also arrange from here. The hut became an important Center for the promotion of Tourism in this region. Wongyel and Chhogyel Dukpa are the two Dukpa brothers are to run the Home stay and assist the Trekkers here. The Baksha Duar Post office a heritage Building and highest Post Office in Alipurduar District. The Tribe Dukpas (Indo-Bhutanese) lived in eleven hamlets of Buxa Hills which mostly loceted in hilly jungles of Buxa Tiger Reserve and altitude ranging from 2400 –6200 feet. Another entry point Rajabhatkhawa (17km from Alipurduar) has an orchidarium, and a Nature Interpretation Center. One can go for a circular trekking from Buxaduar via Chunabhati-Adma to Raimatang. This is actually 8 hours tough trek with an expert guide but usually trekkers prefer to make it as a 3-day comfortable trek to understand nature and the ethnic culture of this region. Local tour operators at Alipurduar provide tents and other materials to the trekkers.

One can have a park safari by car or jeep by taking permission from the Forest Office at Rajabhatkhawa or at Jayanti.

You can trek to “Pukri Mai”, a small sacred pond (Karts Lake) situated inside the park where fishes like magur and singi and turtles are kept. Festivals are held at certain time of the year by both Buddhist and Hindus and local ethnic groups like Dukpas. Dukpa: the word probably comes from Drukpa, the people from the land of thunderstorm. They are the ancient ethnic group among the other inhabitants of Buxa Tiger Reserve. Dukpas used live in the different Hamlets of Buxa Hills from east to west. The seasonal migratory Dukpas are divided mainly into 30 different sects. They originally were the followers of (Drukpa Kagyud) Mahayani Buddhism. Some of them are converted into Christianity. A Finnish Church is still exists along with the age old Buddhist Gumba at Chunabhati. A graveyard at Sadar bazar bears the testimony of Britishers.

Though Forest Authority still not interested in tourism but sometimes they allowed visitor to stay in their Inspection Bungalows. There are Forest I.B. at Buxa Duar, Jainti, Raimatung, South Ridak, Kumargram (Barobisha)and Nimati Rbeat/Range areas. The Beautiful Bungalow at Bhutanghat is destroyed. South Raidak Bungalow was renovated and became Heritage Rest House. A 16-bed dormitory still exists at Buxaduar and Jainti. There are Forest rest houses of West Bengal Forest Development Corporation at Rajabhatkhawa only. Jayanti at the banks of the river Jayanti nestled between mountains and thick forests. Other than Forest Lodges presently some home stay Accommodations are available at Jainti, Raimatung and Buxaduar. In Buxaduar Dukpas Huts (Dwelling houses) are used to stay for the Trekkers, at santalabari(buxa) buxa valley(buxavalley.com) is a great place to stay in with family and friends built on the buxa hill slopes, at Rajabhatkhawa dooars queen is very good place on the bank of a river and some Forest dwellers houses are converted into lodges. A concern named after the Sinchula Range is trying to developing a concept of Home Tourism in these areas along with the Forest Villagers.