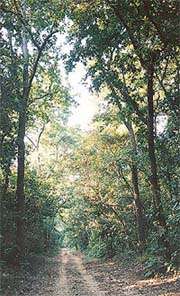 Indian leopard is found at Kalesar

Asiatic elephant is found at Kalesar

Kalesar National Park (Hindi: कलेसर राष्ट्रीय उद्यान) is a protected area in eastern district of Haryana, India, i.e. Yamunanagar 150 km from Chandigarh.[1] It is a popular destination for Leopard and bird-watching.[2] It is home to the red jungle fowl among other birds. It is a sal forest in Shivalik Hills, a name given to the foot-hills of the Himalayas is spread across 11,000 acres (45 km2).[3] The range runs parallel with the Himalayan system from Haridwar on the Ganges to the banks of the Beas, with a length of 200 miles (320 km) and an average width of 10 miles (16 km). The elevation varies from 2000 to 3,500 ft (1,100 m). Geologically speaking the Shivaliks belong to the tertiary deposits of the outer Himalayas and are chiefly composed of low sandstone and conglomerate hills, the solidified and upheaved detritus of the great range in their rear. The intermediate valley lying between the outer hills and the Mussoorie. It was established in 2003.

It is an excellent area to visit for birders and those interested in wildlife. It has a 100-year-old colonial dak bungalow. The forest rest house is at a picturesque point commands a sweeping view of the Yamuna river. Surrounded with multi-layered gardens, and as typical of the 'Raj' bungalow architecture, there are high-ceiling rooms, exquisite parquet flooring and teak paneling along walls. A fireplace with a mantelpiece above and antique furniture completes the period setting. Kgm imd

In the distance hills stand silhouetted against the first pinkish-blue light. A dirt road diverts from the highway where a faded billboard announces entry into the reserve forest mainly consisting of Sal trees. The ride is very bumpy. Among the flora is the small sindoor tree — it has dainty flowers, which turn into pods to produce the vermilion sindoor that adorns the tresses of married women.

Besides the tall, leafy sal trees that constitute the dense age-old forest belt of the Doon valley, there are other trees like Semul, Amaltas and Bahera. Climbers snake up the tree stems, and the forest floor is littered with fallen leaves and foliage plants. Sculptural anthills dot the landscape. There is a watering hole created by the Forest Department to quench the thirst of wild animals. A number of pebbled dry rivulets, which come alive during the monsoon season. A vast stretch of forest clearing is in sight. It is a man-made clearing and a 'fire line' which helps in the intricate task of containing forest fires, which once if they start off can turn into an inferno.

In the jungle, there is a machaan (high observation tower) with a dangerous-looking service ladder. From top the effort is rewarded by a sweeping panorama of the 11000 acres (45 km2) of the great sal forest; criss-crossed by fire lines and meandering rivulets. About 20 km away on the Chuharpur road, is the Ch. Devi Lal Herbal Nature Park, a prestigious, innovative project of the Forests Department, Haryana. The park, spread over 50 acres (200,000 m2) with 61,000 shrubs of herbs and 6100 medicinal tree plants.

Kalesar has 53% dense forest, 38% open forest, 9% scrub. Total forest cover is about 71%. Lack of funds have hindered conservation effort in Kalesar forest. Spread over an area of 11,570 acres (46.8 km2), Kalesar reserve forest is the only one of its kind in Haryana. It is home to a wide range of wild flora and fauna, including a male tiger, 16 male and female leopards, 19 panthers, three elephants and other animals.

Khol Hi-Raitan Wildlife Sanctuary and Bir Shikargah Wildlife Sanctuary are only 3 km aerial distance from each other, both are also only few km away from Kalesar National Park, all of which lie in the Shivalik hills of Haryana. All these three centuries have similar species of wild animal that migrate from century to another.[5]

Situated on both sides of Yamuna Nagar-Paonta Sahib Road in Yamuna Nagar district, it was designated a national park through a government notification in December 2003. However, it is alleged, absence of sufficient funds from the Centre is proving to be a hindrance in wildlife conservation in the national park. As per the wildlife census, undertaken in May 2004 after a gap of four years in collaboration with Wildlife Institute of India in Dehradun, one can find wild boars, sambhars, hares, red junglefowl, porcupine, monkeys, chitals etc. Whereas khair, sal, shisham, sain, jhingan, chhal (Anogeissus latifolia) are the trees found in the forest. It is probably the only forest in Haryana with a natural Sal tree belt.

As for the steps taken to ensure protection of wildlife and environment, the forest staff have been given weapons by the state government to tackle the menace posed by poachers. The state had also set up two special environmental courts in Kurukshetra and Faridabad to deal with crimes related to poaching and illicit felling of trees from the area. Eight watering holes have been dug up across the forest area to ensure that the wildlife does not stray into human habitats on its fringes in search of drinking water. Earthen dams have also been constructed to conserve rainwater for future use of wildlife. There are plans to build a fence around the area in the near future.

The Forests Department, Haryana, with funding provided by the Wildlife Institute of India, installed 80 cameras at 40 locations across the park in December 2014, primarily to monitor the movements of tigers, leopards and other animals in the park, as well as to conduct annual two-month long animal species and animal count survey.[2][4]

Kalesar National park is on the road from Yamunanagar to Paonta Sahib. There are many local and Haryana Roadways-operated buses that take tourists to the park. Visitors can also hire taxis/cabs to reach the park.