Ranthambore National Park (Hindi: रणथंभौर राष्ट्रीय उद्यान) or Ranthambhore is one of the largest national parks in northern India, covering entire area of 392 km². It is situated in the Sawai Madhopur district of southeastern Rajasthan, about 110 km northeast of Kota and 160 km southeast of Jaipur, which is also the nearest airport. The nearest town and railway station is at Sawai Madhopur, about 11 km away. The park is also close to the Kota railway station. RIDCOR operates a mega-highway between Kota and Ranthambhore. Ranthambore National Park lies at the edge of a plateau and is bounded to the north by the Banas River and to the south by the Chambal River. It is named after the historic Ranthambhore fortress, which lies within the park.

Ranthambore wildlife sanctuary is known for its tigers and is one of the best places in India to see these animals in their natural jungle habitat. Tigers can be easily spotted even in the daytime. The best times for tiger sightings at Ranthambore National Park are in November and May. The park's deciduous forests are characteristic examples of the type of jungle found in Central India. Other major wild animals include leopard, nilgai, wild boar, sambar, striped hyena, sloth bear, southern plains gray langur, rhesus macaque and chital. The sanctuary is home to a wide variety of trees, plants, birds and reptiles, as well as one of the largest banyan trees in India.

Ranthambore is best known for its large tiger population. As park tourism and the population of neighbouring villages increased, there were more frequent fatal human-tiger interactions and poaching. The Indian government started Project Tiger in 1973 and allotted an area of 60 mi2 of the park as a tiger sanctuary. This area later expanded to become what is now the Ranthambore National Park.

In 2005, there were 26 tigers living in the park. This was significantly lower than the recorded tiger population of the reserve in 1982, which stood at 44. According to non-government sources there were 34 adult tigers in the Ranthambore National Park in 2008, and more than 14 cubs. This increase was attributed largely to sustained efforts by forest officials to curb poaching. Villagers in the region were being given incentives to stay out of the park, and surveillance cameras were also fitted across the reserve.[1] The Indian government committed US$153 million for these efforts.[1] They were successful enough to make Ranthambore eligible to participate in the Sariska Tiger Reserve relocation program.[2] The first aerial relocation, of the male tiger (Dara) from Ranthambore to Sariska, was done on 28 June 2008 by Wing Commander Vimal Raj, using a Mi-17 helicopter. Unfortunately, this translocated tiger died on 15 November 2010 due to poisoning. 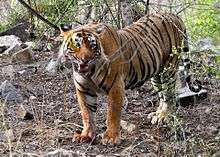 During the past few years, there has been a decline in the tiger population in Ranthambore due to poaching and other reasons.

A tigress known as "Lady of the Lakes" was separated from her parents at a very young age because of poaching. The young tigress was named Machli after the mark on her body that resembles a fish. She gave birth to three female cubs, one being dubbed 'Machli - The Junior'. The father of Machli Jr. died early from an unknown disease, as confirmed by forest officer Fateh Singh Rathore. Machli Jr. mated with the male tiger Bumburam and gave birth to two cubs, Slant Ear and Broken Tail. Baccha is believed to be her grandson. At 17 years old, Machli Sr. is the world's oldest tigress. Machli recently went missing, raising concern among forest officials, as hunting is difficult at her age.[3] After twenty-six days Machli was spotted and located by forest officials. Machli's daughter T19(Krishna) is the current queen tigress of Ranthambore. She recently gave birth to four cubs, with three surviving.

Another popular tigress from Ranthambore is tigress T39, also known as Mala or Noor. Her name comes from the decorative bead-like stripes on her body. She was born to tigress T-13 and fathered by T-12. In March and April 2014, she was seen with her second litter of three cubs. Noor is 6 years old and her son, T72, or Sultan, is from her first litter and is approximately three years old.

Broken Tail was given international publicity in a film made about his life. He left the park area and traveled from Ranthambore to Darra, where he was killed by a train while crossing the railway tracks. The documentary film called Broken Tail features his last journey and has been shown worldwide on many TV channels, including BBC, PBS, CBC, and RTÉ among others, and won the top awards at two of the world's most prestigious wildlife film festivals.

Forests: The Park terrain alternates between dry deciduous forests and open grassy meadow. The flora of the park includes 539 species of flowering plants.

Tigers: Ranthambore is one of the best national parks in the country for spotting a tiger. The majestic predator can be spotted ambling or basking under the sun.

Safari Rides: Rides are carried out at 6:30 and 14:30. Each ride lasts for about three hours. There are two options of vehicles for the safari: 20 seater open top canter or 6 seater open top gypsy. Each ride costs around Rs700-800 per person. The core park area has been divided into several zones and the safari vehicles go to one of those zones. Visitors often take multiple tours, as tiger spotting is rare. There are many resorts to stay in on the way from Sawai Madhopur to the national park.

Ranthambore Fort: The majestic fort, built in the 10th century, towers over the entire park area. It stands 700 feet above the surrounding plain. Inside the fort, there are three red Karauli stone temples devoted to Ganesh, Shiva and Ramlalaji. There is a Digamber Jain temple of Lord Sumatinath (5th Jain Tirthankar) and Lord Sambhavanath. The temples were constructed in the 12th and 13th centuries.

Padam Talao: This is the largest of the many lakes located in the park. A red sandstone Jogi Mahal can be found at the edge of the lake. A gigantic banyan tree, considered to be India’s second largest, is also near the lake.

Air: Jaipur, 160 km away, is the nearest airport to Ranthambore wildlife sanctuary.

Luxury trains: The Palace on Wheels, The Royal Rajasthan on Wheels, Maharajas' Express, and The Indian Maharaja make a scheduled stop at Sawai Madhopur on their eight-day round trips to tourist destinations.

Roads : A network of buses connect Sawai Madhopur, the nearest town, to all the major cities within the state of Rajasthan. The frequency of direct services is not very great, however. A car or taxi must be hired from Kota to Ranthambore. Kota - Ranthambore is a mega highway and can be covered in 1.5 hours.

An economic valuation of the tiger reserve estimated that its flow benefits are worth 8.3 billion rupees (0.56 lakh / hectare) annually. Gene-pool protection services (7.11 billion), provisioning of water to the neighbouring region (115 million) and provisioning of habitat and refugia for wildlife (182 million) were some of the important services that emanated from the tiger reserve. Other services included nutrient cycling (34 million) and sequestration of carbon (69 million).[6]