Gorumara National Park (Pron: ˌgɔ:rʊˈmɑ:rə) (Bengali: গরুমারা জাতীয় উদ্যান Gorumara Jatio Uddan) is a National Park in northern West Bengal, India. Located in the Terai region of the Himalayan foothills, it is a medium-sized park with grasslands and forests. It is primarily known for its population of Indian rhinoceros. The park has been declared as the best among the protected areas in India by the Ministry of Environment and Forests for the year 2009.[1]

Gorumara was a reserve forest since 1895. The park was declared a Wildlife Sanctuary in 1949, on account of its breeding population of Indian rhinoceros. It was declared an Indian National Park on January 31, 1994. Originally as small as 7 km2, Gorumara has grown by incorporating neighbouring lands to about 80 km2.

Political Geography: The park is located in the Malbazar subdivision of Jalpaiguri district, in the state of West Bengal in India.

Physical geography: Gorumara is located in the Eastern Himalayas' submontane Terai belt. This region has rolling forests and riverine grasslands, and is known as the Dooars in West Bengal. The park is located on the flood plains of the Murti River and Raidak River. The major river of the park is the Jaldhaka river, a tributary of the Brahmaputra river system. In this regard, Gorumara is a significant watershed area between the Ganges and Brahmaputra river systems. The park is very close to Jaldapara National Park and Chapramari Wildlife Reserve.

There is no history of human habitation in the park. The park forest bungalow dates back to the British Raj era, and contains a well-maintained log book from its inception, which makes for interesting reading. However Gorumara is encircled by many ethnic villages. More than 10,000 resident forest villagers derive their income from sources including employment in forest department activities, ecotourism, etc. Some of the villages are Sarswati, Budhuram, Bichabhanga, Chatua, Kailipur and Murti Forest Village. 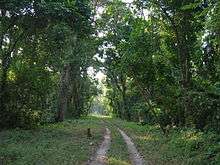 A road inside the park

The park falls in the Indomalaya ecozone. Inside the park, the primary biomes corresponding to the ecozone are:

Both of these are typical of the Bhutan - Nepal - India Terai submontane region.

Mammals: The park is rich in large herbivores including Indian rhinoceros, gaur, Asian elephant, sloth bear, chital, and sambar deer. Small herbivores include barking deer, hog deer and wild boar. There is a comparative lack of large carnivores, with the only big cat being the leopard. The park is not home to any resident population of Bengal tigers, Indian wild dogs, or Indian wolves. Tigers are, however, occasionally spotted here. It does have numerous small carnivores including various civets, mongooses and small cats. The park has a large resident population of wild boar, but the critically endangered pygmy hog has been reported from the park. It also has numerous rodents, including giant squirrels. The rare hispid hare has also been reported from the park.

Birds: Birds at the Gorumara National Park include submontane forest birds like the scarlet minivet, sunbird, Asian paradise flycatchers, spangled drongo, and Indian hornbill. Numerous woodpeckers and pheasants inhabit the park. Peafowls are very common. The park is on the flyway of migratory birds including the rare brahminy duck.

Reptiles and amphibians: The park is home to a large number of snakes, venomous and non-venomous, including the Indian python, one of the largest snakes in the world, and the king cobra - the world's largest venomous snake.

The major conservation focus of the park is to maintain a viable breeding community of Indian rhinoceroses. However, the lack of large predators has caused significantly worrying skews in the populations of large herbivores in the park. The rhinoceros male:female ratio, usually 1:3, shot up to 1:1 - resulting in male dominance fights and deaths. The gaur population also doubled in recent years, with risk of overgrazing.

Poaching was a major issue in the park in the 1970s and 1980s, but now Gorumara is one of the parks least threatened by poaching, with well-equipped rangers and with villagers benefiting from park visitors. However, grazing from fringe villages, and man-made brush fires are major issues at the park.

A recent issue at the park is the increasing number of train accidents involving elephants on railway lines near the park. Three elephants were killed in separate incidents on the same day in May 2006 in train mishaps. Indian Railways and park authorities are presently trying to address the problem. 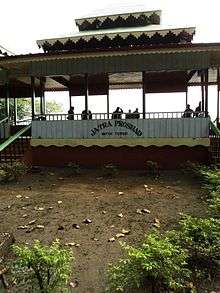 The best way to watch wildlife at the park is to use powerful binoculars, with night vision facilities at night, from the numerous well-located watchtowers at the park. The watchtowers are: 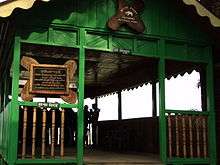 There are no ranger-led or otherwise four-wheel drive vehicle or elephant-back forays into the jungle. Hiking is permitted on metalled roads, but is slightly unsafe considering the population of elephants, gaur and rhinoceros present in the park. The park is closed in the Monsoon season from 16 June to 15 September. The best time to visit Gorumara is from November to March.

One can also visit the adjoining forest villages to get acquainted with the lifestyle and culture of the villagers. A live show of the ethnic tribal dance can be seen every evening in Budhuram Forest Village.

One can visit the Lataguri Nature Interpretation Centre for an interpretive exhibit of the local natural history. 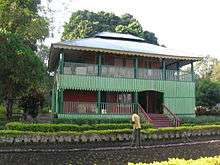 The park forest bungalow is an old wooden rustic cottage which has a watchtower overlooking the salt reservoir.

Accommodations are also available in River Wood Forest Retreats, a 4 star resort overlooking the Gorumara national park and Murti River and at Gorumara Elephant Camp at Dhupjhora. One can stay in newly constructed cottages in the Kalipur village at the fringe of Gorumara built by the State Forest Department. There are many private resort at Lataguri and Ramsai.

13149 Kanchankannya Ex. reaches New Mal Jn every day. Bus or Taxi may be used by travelers to reach lataqguri.