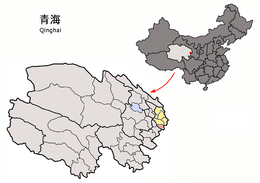 Xunhua Salar Autonomous County (Chinese: 循化撒拉族自治县; pinyin: Xúnhuà Sǎlázú Zìzhìxiàn; Salar: Göxdeñiz Velayat Yisır Salır Özbaşdak Yurt) is an autonomous Salar county in the southeast of Haidong Prefecture of Qinghai Province, China. The county has an area of around 2,100 square kilometres (810 sq mi) and approximately 110,000 inhabitants (2002). In the east it borders on the province of Gansu, in the south and the west to the Huangnan Tibetan Autonomous Prefecture, its postal code is 811100, and its capital is the town of Jishi.

The Salar language is the official language in Xunhua, as in all Salar autonomous areas.[1]

As of April 2009 Xunhua is also the site of a mosque containing the oldest hand-written copy of the Quran in China, believed to have been written sometime between the 8th and 13th centuries.[2] 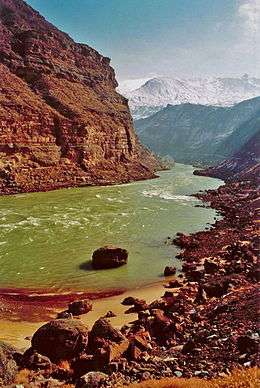 On the Yellow River near Xunhua