Grenaa (or Grenå) is a Danish town and seaport on the east coast of the Jutlandic peninsula. Tourism, education and commerce are important sectors in the economy of Grenaa.[1] It is the only larger town on Djursland. Grenaa is the municipal seat, and the largest town, in Norddjurs Municipality, which covers the northern half of Djursland. 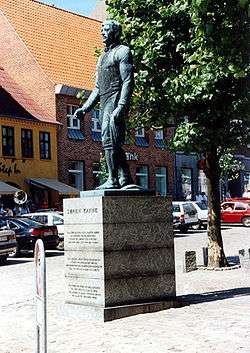 Søren Kanne (1801-1860) was a Grenaa farmer who came to fame in the 1830s heroically rescuing a shipwrecked skipper by the help of his two horses, according to legend. Photo: Jakob Øhlenschlæger

Grenaa was first mentioned in 1231. It was granted the status of a market town in 1445.

Grenaa has a lingering production industry just as in most of the western world. Development of tourism and educational institutions is sought to play a larger role for Grenaa in the future.[2] The 5 km sandy Grenaa Beach is significant for tourism, with a hinterland of summer cottages, including many rentals.[3] Grenaa is a regional shopping centre for central-eastern Djursland, an about 40 km x 40 km peninsula, protruding into the sea, between Denmark and Sweden at the entrance to the Baltic Sea.

With 14.601 (2014) inhabitants Grenaa is also the largest town on the c. 40 km x 40 km peninsula, Djursland, where coastal tourism is important.[4] Djursland has 22 sandy beaches along the three-sided 260 km coastline, with in the order of 7.000 summer-, and out of season-, rentals, primarily close to the coast and beaches.[5] Grenaa Beach can be seen as the best of the beaches on Djursland, as it was elected as one of the two best beaches in Denmark in 2006.[6] All coastlines in Denmark are accessible to the public by law, contributing to making the walkable and unspoilt coastlines of Djursland an asset for Grenaa's tourism.[7]

The climate is coastal temperate, influenced by the Gulf Stream. Westerly and south-westerly winds are common. The yearly precipitation is 700 mm,[1]. The average summer temperature is 16 degrees Celsius.[2] The coldest month is January with an average temperature of 0.5 degrees.

The geographical region, Djursland, where Grenaa is situated on the east coast, has an average population density of 42 inhabitants per square km, as compared to 407 for neighboring England and 230 for Germany.[8] This, combined with the long coastlines, means that it seldom gets crowded on the coast and beaches. Something that also applies to the geologically varied often roling-hill country-side and farmland of Djursland, of which a bit more than 10% is forest[9] Many Danes have a working knowledge of English and to some extent German - the two main languages taught in Danish schools. 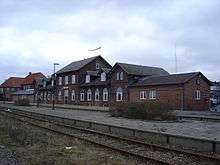 Grenaa is connected by ferry to Varberg in Sweden and the Danish island of Anholt. The town is also connected by railway to Denmarks second largest city, Aarhus, 60 km to the south-east, and is served by Grenaa railway station, terminus of the Aarhus-Grenaa railway line, and offering direct local train services to Aarhus and Odder as part of the Aarhus Commuter Rail service. Aarhus Airport lies 20 km in the same direction. The town has a commercial seaport that has been expanded in recent years.[10]

Some Wiki-links related to Grenaa area