Ventforet Kofu (ヴァンフォーレ甲府, Vanfōre Kōfu) is a Japanese football (soccer) club from Kofu. The team competes in the J. League Division 1. Its home ground is the Kose Sports Stadium.

The word "Ventforet" is a compound formed from two French root words: "vent" (wind) and "forêt" (forest). The name alludes to the famous phrase Fū-rin-ka-zan (風林火山）that Shingen Takeda, a prominent Kofu-based daimyo in the Sengoku period, emblazoned on his war banners. The phrase contains four similies: as swift as the wind; as silent as a forest; as fierce as fire; as immovable as a mountain.

The club was founded in 1965 when the old boys' club of Kofu Dai-ichi High School, the Kakujo Club, started to recruit graduates of other high schools with the intention of promotion to the Japan Soccer League.

The club joined the newly formed JSL Division 2 in 1972. They stayed there until the conclusion of the league in 1992 when it became a founding member of the former Japan Football League.

Kofu Club was formed by volunteers, unlike other mainstream football clubs at that time in Japan, whose players were mostly the employees of their sponsoring companies.

The club was renamed Ventforet Kofu in 1995 and joined J. League Division 2 in 1999 when it was formed. The club survived a difficult period between 1999 and 2001, when it suffered from financial troubles as well as miserable results on the pitch, including a streak of twenty-five consecutive losses. Ventforet finished bottom for three seasons in succession and was dubbed as "Excess baggage of J2."

Ventforet improved in 2002, and in 2005 finished third, gaining promotion to the Japanese first division by winning the promotion/relegation play-offs against Kashiwa Reysol. However, the team was relegated with a week remaining in the 2007 season.

At the end of 2010 season, the team was promoted a second time. Despite having striker Mike Havenaar contend for the Top Scorer award in division one the following year, the club was relegated again at the end of 2011. However, it returned after only one year's absence as champions of division two, Ventforet's first championship in its thirty-six year history. Ventforet has remained in division one of the Japanese League since then. 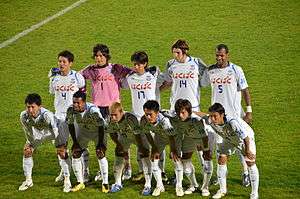