Bardstown is a home rule-class city[2] in Nelson County, Kentucky, in the United States. The population was recorded as 11,700 by the 2010 census. It is the county seat of Nelson County.[3] It is named for the pioneering Bard brothers. David Bard obtained a 1,000 acres (400 ha) land grant in 1785 in what was then Jefferson County, Virginia from Governor Patrick Henry. William Bard surveyed and platted the town.[1] It was originally chartered as Baird's Town.[4] 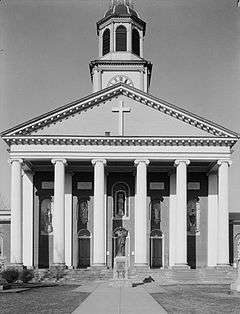 First settled by European Americans in 1780, Bardstown is the second oldest city in Kentucky.[5] Named county seat of the newly created Nelson County, Virginia (now Kentucky) in 1784, the town was formally established in 1788. It was incorporated by the state assembly in 1838.[4]

Reflecting the westward migration of Americans over the "Blue Ridge" after the Revolutionary War, Bardstown was also the first center of Roman Catholicism west of the Appalachian Mountains in the original western frontier territories of the United States.[6] The Diocese of Bardstown was established on February 8, 1808, by Pope Pius VII, (1742-1823, reigned 1800-1823), to serve all Catholics between the Appalachians and the Mississippi River. This divided the previous all-encompassing Diocese of Baltimore, established in 1789. This area is now served by 44 dioceses and archdioceses in 10 states, showing the development of communities with Catholics across the nation as immigration brought new populations.

The Bardstown cathedral is the Basilica of Saint Joseph Proto-Cathedral. In 1841 the seat of the Diocese was transferred to the nearby larger river town and port of Louisville on the south bank of the Ohio River.[7] Bardstown also has a Roman Catholic parochial high school, Bethlehem High School.

The Old Talbott Tavern, built in 1779 and located just off the Courthouse Square in the center of Bardstown, is part of the city's rich history.[5] Several notable Americans passed through the tavern's doors, including famed frontiersman Daniel Boone and future 16th President, Abraham Lincoln.[8] Bullet holes in an upstairs wall are reputed to have been shot by Jesse James.[9] People claim to have encountered ghosts or other paranormal activity at the tavern.

Bardstown is the site of My Old Kentucky Home State Park. Judge John Rowan and his wife Ann Lytle Rowan commissioned the construction of a large mansion they named "Federal Hill," which is the farm that inspired the Rowan's cousin Stephen Foster to write the song "My Old Kentucky Home". Federal Hill is depicted on the reverse of the Kentucky state quarter issued by the United States Mint in 2002.[5]

Several distilleries operate in and around the Bardstown area, including Jim Beam, Heaven Hill, Barton 1792 and Maker's Mark, which is located in nearby Loretto.[5] The regional production of bourbon is celebrated by the annual Kentucky Bourbon Festival, whose promoters have trademarked the phrase, Bourbon Capital of the World, to apply exclusively to Bardstown.[10] The local tourism commission promotes the use of the trademarked phrase.[11] A public museum, the Oscar Getz Museum of Whiskey, showcases this aspect of local history.

Bardstown's downtown area is designated as a historic district and listed on the National Register of Historic Places. In 2012, Bardstown was voted as "The Most Beautiful Small Town in America" in the Destination Marketing Association International's "Best of the Road" competition.[12]

The climate in this area is characterized by hot, humid summers and generally mild to cool winters. According to the Köppen Climate Classification system, Bardstown has a humid subtropical climate, abbreviated "Cfa" on climate maps.[14]

There were 4,712 households out of which 32.9% had children under the age of 18 living with them, 37.3% were married couples living together, 19.5% had a female householder with no husband present, 5.9% had a male householder with no wife present, and 37.4% were non-families. 31.5% of all households were made up of individuals and 9.7% had someone living alone who was 65 years of age or older. The average household size was 2.42 and the average family size was 3.01.

There were 4,195 households out of which 34.6% had children under the age of 18 living with them, 42.7% were married couples living together, 17.6% had a female householder with no husband present, and 35.6% were non-families. 31.2% of all households were made up of individuals and 10.9% had someone living alone who was 65 years of age or older. The average household size was 2.40 and the average family size was 3.00.

The Bluegrass Parkway is a limited-access highway that passes just south of Bardstown. A part of the Kentucky parkway system, the highway was formerly a toll road. Tolls were removed in 1991 after its construction bonds had been paid off.

Railroad freight service is provided by the R.J. Corman Railroad Central Kentucky Lines, over the former Bardstown Branch of the Louisville and Nashville Railroad.

Corman also operates My Old Kentucky Dinner Train, a short-route passenger train specializing in dinner service. It travels the line from the historic Bardstown depot to Clermont and back. 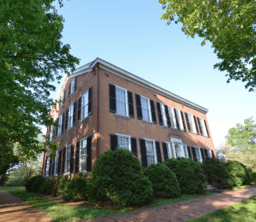 Almost all of the city is served by the Bardstown City Schools; the district also includes significant portions of the built-up area outside the city limits.[22] Brent A. Holsclaw is the Superintendent of Schools.

Some of the city is instead served by the surrounding Nelson County School District.

See also: List of people from the Louisville metropolitan area

Bardstown provides much of the setting for the post-apocalyptic novel First Angel by Ed Mann. Published in 1989, the novel tells of life after a large-scale nuclear attack in the United States and how a flood of refugees complicate survival in Nelson County. The Kentucky National Guard armory, school, courthouse and other buildings are mentioned throughout the book.[25]