The town was known in antiquity as Vicus Aquensis[2] (Latin for "watery neighborhood") and in the Middle Ages as Aquae Convenarum[3][4] ("Waters of the Comminges"). Its present name similarly means "Baths" (Occitan: Banheras) of Bigorre, the area of southwestern France once inhabited by the Bigorri and now forming most of the department of Hautes-Pyrénées. Either Bagnères-de-Bigorre or nearby Cieutat was apparently the "Begorra" attested in AD 400, which also derived from the ancient tribe.[5]

Bagnères-de-Bigorre is located in the foothills of the Pyrenees partly in the valley of the Adour some 18 km (11 mi) southeast of Tarbes and 15 km (9 mi) east of Lourdes. 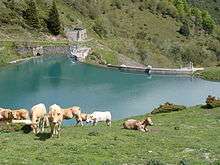 The Castillon Dam at La Mongie

Bagneres-de-Bigorre is relatively untouched by the west by south-west disturbances which blow out before the high border mountain range. It is however intensely exposed to north by north-west disturbances that collide with the terrain. This barrier effect is felt up to the foothills so that springs, autumns, and winters are cool and rainy while summers are often hot and particularly stormy.

Bigorre was conquered by the Roman general Julius Caesar in 56 BC and incorporated into the province of Gallia Aquitania. Valerius Messala stamped out the last pockets of tribal resistance in 28 BC at a victory over the Campani on a hill in Pouzac.[4] The Romans subsequently settled and greatly frequented Vicus Aquensis's natural springs.[2] At its greatest extent, the Roman vicus covered about half as much area as the present community.[8] In the 4th-century reforms, the area around Vicus Aquensis became Aquitania Tertia or Novempopulana. It was sacked by the Visigoths amid the Barbarian Invasions.[2]

The Visigoths in the area were displaced by the Franks following their defeat at the AD 507 Battle of Vouillé, but there are no documents or remains from the area to provide guidance on local history until 1171. Archaeologists have proposed that the city was destroyed at some point by an earthquake and abandoned following a plague outbreak in 580.[4]

The area had recovered by 1171, when Centule III, count of Bigorre, granted "Aquae Convenarum" a liberal charter.[10] The bill of rights and franchises lists four villages in the area protected by ramparts. By 1313, 800 "fires" (i.e., taxable homesteads) were recorded, making Bagnères as large as Tarbes, the county seat.[4] The town was a place of manufacture and trade, with only 40% directly involved in agriculture. Mills were erected on widened canals fed by the Adour; in addition to grinding wheat, they were used to stamp cauldrons, forge scythes, and tanning hides.[4] The Black Death reached the town in 1348. Amid the Hundred Years' War, the town fell into English possession in 1360 before suffering a second outbreak of plague the following year. Henri de Trastámara, an ally of the French king, plundered, ransomed, and razed the town in 1427. Two years later there were no more than 291 "fires" in Bagnères, although the town slowly repopulated.[4]

The town became still more commercial. In 1551, King Henry III of Navarre reformed the town's government, replacing its six consuls indirectly elected by a general assembly of the locals with a larger council of 40.[4]

The area's natural springs again rose to national prominence under Jeanne d'Albret,[2] who became queen of Navarre and countess of Bigorre upon her father Henry's death in 1555. She frequented the baths, prompting many other prominent visitors to follow.[10]

Already badly disposed towards Catherine de' Medici, queen regent of France, Jeanne converted to Calvinism on Christmas Day, 1560. She began attempting to impose the Reformation on her domains the following year. As the people of Bagnères remained largely Catholic, following the onset of the French Wars of Religion after the Massacre of Vassy, arrests for heresy began in 1562. While the Count of Montgomery was recovering Béarn from Catherine's allies in 1569, he went on to demand large ransoms from her other towns, including Bagnères. (It is unrecorded whether the people of Bagnères paid him, but he is recorded leaving the town unmolested and leaving for Gers.) The governor of Bagnères Antoine Beaudéan was killed by the Protestant warlord Lizier in an ambush near Pouzac in 1574.[4] By the end of the Wars of Religion, the town was ruined. Plague also returned in 1588. The outbreak ended following a religious procession prompted by the "Lighting of the Liloye", a Marian apparition at the Chapel of Notre-Dame-de-Médous.[4]

The ascension of Jeanne's son Henry as king of France in 1589 united his titles—including count of Bigorre—with the French monarchy.[4]

The plague struck Bagnères again in 1628, 1653, and 1654. Public health measures were taken, with most patients isolated in the Salut Valley. The disease did not reappear after December 1654.[4]

On 21 June 1660, strong earthquakes hit the town, continuing for three weeks. Only seven people were killed, but 150 houses were damaged and the springs initially dried up. This was only temporary, however, and the water flowed again sometime later.[4] Reconstruction was carried out with dimension stones from the Salut Quarry. This stone has the distinction of becoming like marble once polished, a feature that characterized the architecture of the town afterwards.

Hydrotherapy was gaining importance. There were 25 private businesses by 1787. In 1775, a convent building was transformed into a gambling establishment called the Vaux-Hall where there was also dining and dancing. This is the first casino in Bagnères.[4]

During the French Revolution, "moderate suspects" took refuge in the city from 1789 to 1793, ready to flee to Spain if the situation worsened. The departmental authorities were wary of the Bagnèrese, to whom they ascribed little civic or revolutionary spirit. In late 1793, before the hospitals in the southwest became saturated, the wounded were evacuated to spas. At Bagnères, the Saint Barthelemy Hospice, the Uzer and Lanzac houses, and the Hospice of the Médous Capuchins were used as military hospitals.[4] 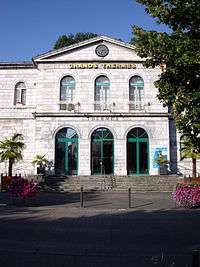 Bagnères on the Midi Railway's branch road south from Tarbes 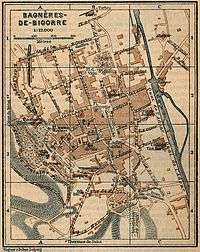 Plan of Bagnères in the 19th century.

In the 19th century, the hydrotherapy offered by Bagnères's spas was reckoned particularly effective for digestive complaints[2] but the private spas were growing more decrepit. In response, the municipality organized the construction of a Grand Thermal Spa (the "Thermes"), which was completed in 1828.[4] By the 1870s, the tourists would double the town's population of c. 9500 during the "season", which ran from May until about the end of October.[2] The casino also opened its own spa, the "Néothermes".[10]

The supply of marble became a pillar of the local economy, with the expansion of the Géruzet marble works making it one of the largest in France from 1829 to 1880. In the 1870s, the industry employed a thousand people.[4] Slate was also quarried.[10] Dominique Soulé expanded his business from an old mill purchased in 1862, the same year the town was connected to the Midi Railway.[4] The town also produced woolen and worsted cloth, leather, pottery, and toys.[2] A local specialty was barège, a light fabric of mixed silk and wool.[10]

The demolition of the city's walls allowed the completion of ring roads around the town,[4] and the town was the site of tribunals of first instance and of commerce.[10]

The town's population had declined to around 7000 at the onset of the First World War,[10] which resulted in the expansion of industry in Bagnères, particularly in the field of railway rolling stock. The marble industry collapsed but mechanical and textile industries replaced it. The share of hydrotherapy in the economy also decreased. In June 1944, during the Second World War, a punitive expedition of a company of SS murdered 32 in the town and hundreds more in the valley in retaliation against the actions of the resistance in the region.[4]

The postwar period saw rapid urban growth, particularly in the 1960s. Rural areas of the commune disappeared. The territory was occupied by dwellings to the borders of the neighbouring communes of Gerde and Pouzac which also become urban.[4]

At the end of the 20th century industrial activity decreased. The thermal spa guests were always present and new jobs were created by the implementation of the regional Centre for Reeducation and Rehabilitation, a large retirement home, and a nursing home.[4]

(Not all data is known)

Bagnères-de-Bigorre has twinning associations with:[12]

The Community of communes of Haute-Bigorre (CCHB) was created in December 1994 to support joint development projects. It has been allocated a general grant for operations by the State and large grants by the General Council, the Regional Council, the State, and by Europe. Its skills are in:

Bagnères-de-Bigorre has a regional hospital which has 25 beds for medicine, 20 beds for longer stays (4 of aftercare for alcohol withdrawal), and 220 beds for rehabilitation and physical medicine (25 places for day hospitalization). On the Castelmouly site (accommodation for the dependent elderly) the capacity is 142 beds plus 2 temporary, 36 long-stay beds, and 8 day care places for people with Alzheimer's disease or related disorders. The town also has a famous thermal baths.

Schools in the commune are in the school district of the Academy of Toulouse.

In 2010 the commune had 8,047 inhabitants. The evolution of the number of inhabitants is known from the population censuses conducted in the commune since 1793. From the 21st century, a census of communes with fewer than 10,000 inhabitants is held every five years, unlike larger communes that have a sample survey every year.[Note 1]

Sources : Ldh/EHESS/Cassini until 1962, INSEE database from 1968 (population without double counting and municipal population from 2006) The economy of Bagnères-de-Bigorre is mainly in the secondary sector, at one time including railway materials, but Hydrotherapy and tourism are the main activities in the commune.

Today there are many SMEs and SMIs specializing in electrical equipment, mechanical, and aerospace industries located in the commune.

There are Four commercial zones of activity:

The Grands Thermes de Bagnères-de-Bigorre (Grand Thermal Baths of Bagnères-de-Bigorre) are traditionally employed for treatment of rheumatism, nervous afflictions, indigestion, and other maladies.[10] The naturally-sourced waters vary in temperature from 90 to 135 °F (32 to 57 °C).[2]

Like most thermal cities, Bagnères-de-Bigorre has a casino. It is in the same building with the Aquensis thermal spa. The ski resort of La Mongie is also nearby.

The railway that connected Bagnères and Tarbes was closed in the late 1980s and the service is now provided by the TER bus from the old railway station which is now known as the bus station. The nearest airport is Tarbes-Lourdes-Pyrénées Airport some 30 kilometres (19 miles) to the north.

The commune has several buildings and structures that are registered as historical monuments:

Other sites of interest

The commune has two religious buildings and structures that are registered as historical monuments: 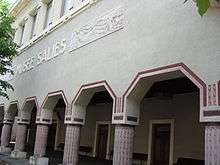 The town has had a museum since at least the early 20th century.[10]

The town has three museums:

The city has several cultural centers:

Many cultural events are organized:

The town has an orchestra called the Harmony Bagnéraise and a choir called La chorale des chanteurs montagnards (Chorus of Mountain Singers) which is the oldest secular choir in France and Europe [ref. required].

The Stade Bagnérais is a French rugby union club who have long played in the First Division, twice reaching the final of the Championship of France (1979 and 1981), and which plays in Fédérale 1 in the Rugby Championship in France. 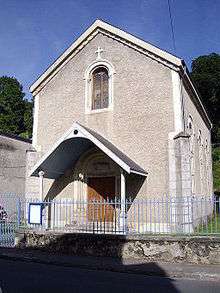 The Parish of Bagneres-de-Bigorre includes 17 communes in the diocese of Tarbes and Lourdes (Haut-Adour Sector).[28]

There is also a temple of the Reformed Church built by Emilien Frossard in 1857. It is attached to the parish of Hautes-Pyrenees with Tarbes and Cauterets.